Live Wrestling every Friday at 8pm 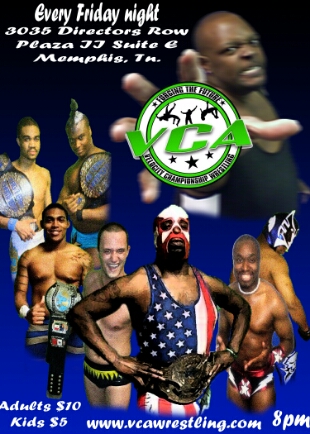 As we prepare to deliver even more interviews with Velocity Championship Action and with our editorial staff pondering constant ideas for new material, we enjoy being able to take a break to report the weekly preview for our live Friday night shows. Every show brings it and last week was no exception. We would bear witness to Chris Evans facing Malik, where if Evans won, he would get another shot at the VCA Tag Team Championship. He would end up doing so though not beating Malik via pinfall or submission but the victory would remain the same.

Brooks & Payne would square off in tag team action against new comers, Dante HP and Christian Lotus. This would be a showcase of excellent tag team ability shown by both teams. At the end of it all, Lotus would state that ‘we hadn’t seen the last of them.” What could he mean by that? Is there some kind of ultimate motives here? We will report more as we know more ourselves! One thing is for sure, The Tag Team Champions, Brooks & Payne have shown us they won’t back down from anyone!

At the end of the night, we would see some friendly competition between the Juniorvative Champion, Allen Dalton, and the Heavyweight Champion, Kaptain Justice. The two would show exactly why they hold their respective Championships as they took it to each other.  Dalton would just about put Justice away with his new found finisher, The A.D.; however, Justice would launch Dalton in the air and slam him down with his patent Chokeslam.

As it seemed that Justice was making the cover, Big Tiny would hit the ring putting the boots to Justice. Tiny would turn his attention to Dalton as he nailed him with the Southside Cut. Dalton was already lifeless when Terra Rae would slide a door in to make matters worse. Tiny would continue to set Dalton up on the door in the corner, aiming to spear him through like he had done Justice the week before. Official Fred Jackson would jump in the way stopping the big man from doing so. After the second attempt that Jackson thwarted, Tiny turned his focus to destroying the referee. After putting him down and nailing two thunderous leg drops, Tiny look to splash the Official from the second rope to further the brutality.

Justice would make the save nailing Tiny in the back with a steel chair. Tiny would regain himself and turn to take the chair to the sternum.  And then, another deafening shot to the back. Tiny would exit the ring at this point to gather his bearings but Rae would not allow him to re-enter. Tensions are getting high as we head into Law and Order on May 1st, 2015 to say the least.

Be sure to see how these events further transpire this and every Friday night as Velocity Championship Action presents live wrestling action with great concessions and meet and greets with your favorite stars. Merchandise is available for purchase at every intermission. VCA is brought to live from its Studios in Memphis, Tennessee. The Studio is located at 3035 Director’s Row Plaza II Suite E. Tickets are $10 for Adults and $5 for kids. Children 5 and under are absolutely FREE!