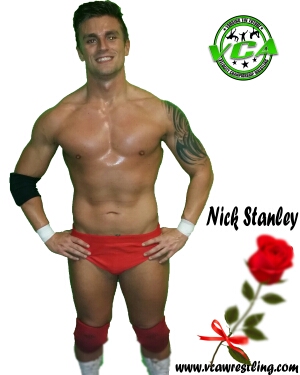 This past Friday at VCA’s Law & Order, newcomer Nick Stanley made his VCA debut against one half of Big Country’s Xander Raines. Stanley arrived in the VCA studio to compete against Raines in singles action and the fans of VCA instantly took a liking to the heartthrob. Stanley worked his magic by greeting members of the VCA audience and went as far as to show some love to a very special lady of the crowd giving her a rose. Stanley may have won over the fans with his charm, but Xander wasn’t buying into the hype. The match would be a good one as both men worked hard putting on a spectacular performance. Stanley brought his A game hitting Raines with numerous moves including a middle rope crossbody, but the gladiator just couldn’t put the beast from Grenada down. Raines refused to die fighting back with powerful moves such as the Big Bang and Blue Thunder Powerbomb. As if that wasn’t enough, Big Tiny, who was in Raines’ corner on the outside, interfered in the contest numerous times hoping to give his partner the edge. Stanley kept hope alive by refusing not to give up and driving off the energy of the fans that just wouldn’t let Stanley suffer defeat. The turn of the match occured when Raines tried squashing Stanley by delivering a top rope avalanche. Stanley quickly rolled out of harms way which caused Raines to crash and burn into nothing but the canvas. Stanley began making a comeback hitting Raines with a flying forearm and a spinebuster which took it’s toll on the over three hundred pounder. Stanley comprehended that he needed a little more to finish Raines off so he decided to attempt a flying attack from the top ropes. Just as Stanley made it to the top, Tiny shoved Stanley off sending the match into an instant disqualification. Fans were outraged with Tiny’s actions, but were pleased to know that Stanley won via disqualification. Tiny continued into the ring assaulting Stanley with the help of Raines. The two colossus figures hammered Stanley to the mat showcasing their frustration with the young star. Raines and Tiny proceeded to try and connect with their finisher When Worlds Collide, but Stanley had other plans for the duo. Stanley quickly rolled out the way causing Raines and Tiny to collide. Tiny instantly crashed to the mat whereas Stanley nailed Raines with a spin kick taking Raines down. Stanley stood on guard waiting to see what would happen next, but Tiny convinced Raines not to pursue Stanley due to them needing to prepare for the Battle Royal later that evening. After the show we caught up with Raines and he informed us that the next time he sees Stanley the outcome won’t be the same.