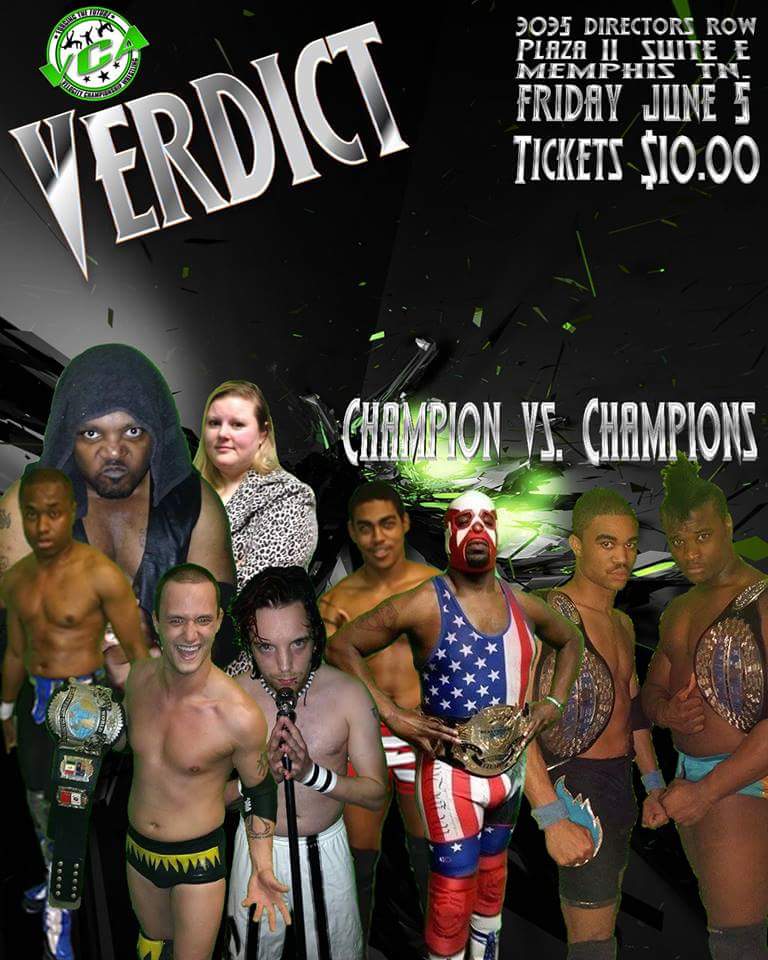 Velocity Championship Action’s Verdict is tonight at 8pm! Tickets for everyone are only $10 so make sure to arrive at the venue early in order to acquire a good seat. The action at Verdict will be hot and heavy from start to finish!

Crazy Jack will go one on one against Terra Rae’s personal body guard, Jake, in what is for surely going to be a slug fest. The two will compete in VCA’s first ever Ironclad match where any item made of metal can be utilized. Everyone know both Jake and Crazy Jack can get down dirty when weapons are involved, especially metal ones.

As found out last week, Big Tiny will meet referee Fred Jackson in singles action. Tiny has continued to blame Fred for his unjustly decision at Law & Order a month ago and has tortured Jackson every step of the way since the event. Terra booked this match claiming Jackson had no right in awarding the match and heavyweight championship at Law and Order to Kaptain Justice when he was unsure of the placement of Tiny and Justice’s arm. For this negligent act, Rae’s stipulation on this match is that if Jackson doesn’t defeat Tiny he will be fired!

Another match that’s been heavily talked about is the match for the Juniorvative championship. Syn will take on Allen Dalton in singles action in hopes of capturing the championship and making Dalton pay for his sins. A feud that escalated during Syn’s feud with Sanchez, Syn promises to make Allen pay for sticking his nose where it didn’t belong. Dalton defended his actions stating that he would always stick by his friends no matter the circumstances, but Syn stills considers it as meddling. Syn insists after tonight people will view Dalton differently and the Juniorvative championship will be around the waist of someone righteous.

In the Main Event of the evening, Brooks and Payne will defend their VCA tag team championships against Chris Evans and the VCA heavyweight champion, Kaptain Justice. Not only will the tag titles be on the line, but Justice’s heavyweight championship will also be up for grabs. If Brooks or Payne pins Evans or Justice, Payne will automatically become heavyweight champion making history by becoming the first ever VCA double champion. Justice informed Evans last week they would fight until they could no longer fight.

This and a lot more action will take place tonight Friday, June 5 at 8pm. Tickets are $10 for adults and kids. The VCA studio is located at 3035 Directors Row inside the Directors Plaza II Suite E Memphis, TN.