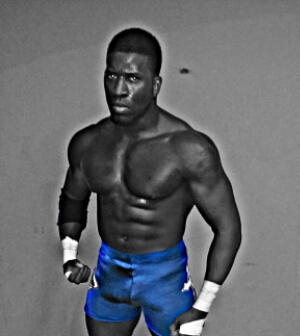 VCA’s Broken Hearts took place Friday, February 6 at the VCA studio and the event didn’t disappoint. It was a night of nonstop action full of memorable and energetic pulse beating action. One match that stood out was the contest between Anthony Payne and Shawn Hoodrich. Both men put on a terrific showcase laying it all on the line before the VCA audience. In the end it would seem as if Payne was about to put Hoodrich away with his now so famous Ice Breaker finisher, but someone had other plans in store for Payne. As soon as Payne delivered the Ice Breaker, Andres Sanchez entered the studio. Sanchez jumped on the apron causing the distraction prompting Payne to take his attention away from the contest. Payne tried attacking Sanchez, but Sanchez cowardly fled the scene by jumping from the apron and onto the floor. Hoodrich, taking advantage of the situation, derailed Payne by delivering an impactful spear followed by an aggressive F5 stealing the win from Payne. We caught up with Sanchez later that evening and Sanchez informed us that Payne got exactly what he deserved. Sanchez added that it was only right for Payne to suffer defeat. We interpreted it that Sanchez was bitter towards Payne because Sanchez  had lost his match earlier that evening to Mike Cobbs and Sanchez was seeking retribution. Sanchez never was able to defeat Payne so he allowed his jealousy to get the best of him and aided Hoodrich in defeating Payne. This Sunday, February 15 we’re being told by Terra Rae that Sanchez and Payne will meet in the squared circle.