Brooks & Payne versus the Mortons at Law & Order 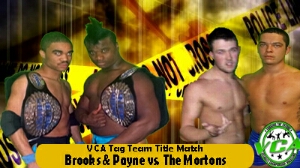 It’s always a Star’s dream to win a championship. It is a mile marker in our industry. People strive and push themselves to the very limit for a hope to challenge a Champion to a match for their coveted Championship. So imagine how being the first ever VCA Tag Team Champions should feel for Brooks & Payne. They will now forever be in the Velocity Championship Action history books. On top of all of that, they are a force to be reckoned with combining power and technique in the ring.

When it comes to them, I managed to catch up not too long ago with Brooks. He stated that they are ready for anyone from the Morton’s all the way to the Tate Twins and on.  He stated there isn’t a team that can stop Brooks & Payne and take their Tag Team Championships. In a twist of coincidence, The Morton’s would step up to answer that call. David Morton sent a video to VCA Offices which aired at this week’s show.

Morton told Brooks that since their last encounter, a single’s match between Brooks and David, he has been training. He went on to say he is not the same man Brooks faced before. He has learned to be more rounded and how to take on anyone. He concluded by telling Brooks they better bring it at LAW & ORDER, because they will be in for a fight.

The question is will they be able to overcome and become the new Tag Team Champions? Or will Brooks & Payne proof what Brooks saying was true in that they are unstoppable? This question will certainly be answered this Friday night on May 1st, because VCA will present LAW & ORDER! Adults admission will be $12 and kids will be $8. Don’t miss a second of the greatest action Memphis, Tennessee and all of the Mid-South!