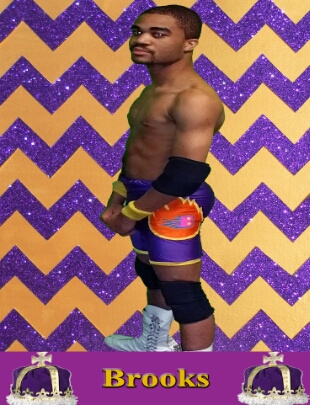 Brooks, the current Juniorvative champion, is looking forwards to competing and defending his championship March 6 against TNA Impact Wrestling’s own Davey Richards. This will be the two’s second meeting as the first was a down right fight with Richards showing everyone why he’s one of the best in the World. Be that as it may, Brooks still walked out with the victory after a controversial ending. We caught up with Brooks and Brooks promised that things will be different this time because he’s been working extra hard and studying to prepare for he and Richard’s match March 6 at Law and Order. When asked about turning on Andres Sanchez weeks ago, Brooks informed us that it was time to let the dead weight go. Brooks insisted that he became tired of Sanchez sucking up his accolades and enjoying the luxury life that he worked hard for. Brooks claims that if Sanchez has a problem with him he can always use an easy warmup match before Davey makes it to Memphis on the 6th. As for Sanchez’s comments on making sure that Brooks nor Payne wins the heavyweight title, Brooks said that if he’s entered in the Battle Royal on the 6th he’s going to personally dump Sanchez out and go on to become a double champion. Brooks is as confident as ever going into this contest against Richards on the 6th and he’s paying Sanchez no mind. Watch it all unfold this Friday (2/27) and Friday, March 6.