Brooks vs. David Morton for the VCA Juniorvative championship! 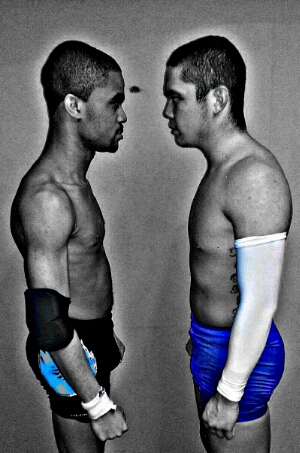 Another match that didn’t disappoint at VCA’s Broken Hearts was Brooks versus David Morton for the VCA Juniorvative championship. Brooks, who was reportedly feeling under the weather, went out and put on a five star caliber match with David Morton. The match itself went back and forward causing many to reconsider their prediction on who they thought would be victorious. In the end Brooks would try and make use of his Juniorvative championship, but Morton dodged the attack getting possession of the title. Morton decided that he’d give Brooks a little of his own medicine by blasting the Juniorvative champion with his title and the fans agreed.  Just as Morton was about to knock Brooks into next week, referee Fred Jackson stepped in capturing the title from Morton. Morton argued with the referee about Brooks trying to make use of the belt, but the referee wasn’t having it. Brooks would soon get the upper hand on Morton by using illegally tactics and rolling Morton up for the win leaving many of the VCA fans pissed. One fan shouted that Brooks only cheats to win whereas another shouted Brooks had to cheat because he could never defeat Morton on his own. This leaves many to wonder is it over between Morton and Brooks and will there be a round 2. After the contest it was announced that Friday, March 6 Brooks will defend his Juniorvative championship against one half of the American wolves, Davey Richards.