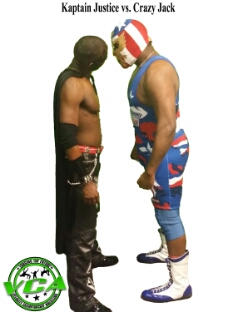 Crazy Jack versus Kaptain Justice will happen Friday, February 6 at VCA’s Broken Hearts. We just learned this after hearing that Crazy Jack not only wants to defeat Justice, but Jack wants to drag Justice’s soul to hell as well. Justice commented saying that Jack is going to be the one that’s going to hell, but Crazy Jack insists he’s already living in hell. After cleansing the company of Chacatu,  the Kaptain says Jack is just another evildoer that he’d have to get rid of. Jack as of late has a pretty impressive resume as he hasn’t loss a match in months. With an impressive streak like the one Jack has of late it’ll be pretty hard to bet against the man from the unknown. Could Kaptain Justice be just another victim of the Wasteland or will Crazy Jack’s winning streak be over at Broken Hearts? Stay tuned and attend our weekly shows as this one continues to unfold.