Cymba and Evans take on Big Country this Sunday 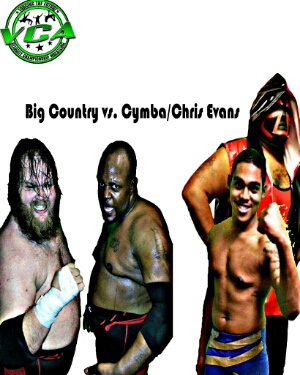 This Sunday the team of Big Country takes on Cymba and Chris Evans in tag action. There has been much speculation involving the new VCA tag team titles and many assume that Terra Rae will hand Big Tiny and Xander Raines the titles without any hard work. One of those individuals is the Hardcore Legend himself, Cymba. Cymba made it known that not only does he not like what Big Country stands for, but he doesn’t like the idea of Terra handing over the titles with ease. Cymba has insisted that Tiny and Raines are nothing more than a couple of big mouths blowing hot air. Cymba wanted Big Country so badly that he barged in Terra’s office and demanded a match with the duo. Cymba went as far to say that he’d take them both on in a Handicap match if he had to. Seeing how Cymba saved newcomer Chris Evans from Big Country’s assault last Friday, Terra decided to team the two up in taking on Tiny and Raines. This wasn’t exactly the partner Cymba had in mind, but Cymba decided to roll with it for the time being. This Sunday we’ll see how Evans fairs with Cymba on his side against the monstrous team of Big Country.