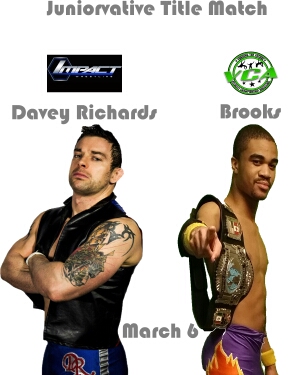 Friday, March 6 at VCA’s Law and Order, Brooks, the Juniorvative champion, will defend his championship against TNA Impact Wrestling’s Davey Richards. The last time the two met Brooks upped one over Richards shocking the entire studio audience and Davey hasn’t forgotten. That night Davey vowed that he’d return and it’ll be for Brooks and Brooks only. At Law and Order Brooks will defend his newly found title against a tempered Richards who can’t wait to get his hands on Brooks. For Davey it isn’t about the title, but more so of the revenge he’s seeking for the upset win that took place during he and Brooks last meeting.  Richards knows the best way to upset Brooks is to not only hurt him, but to hurt and kill his pride by taking the Juniorvative title. Looks like we could be looking at a new Juniorvative champion after Law and Order.