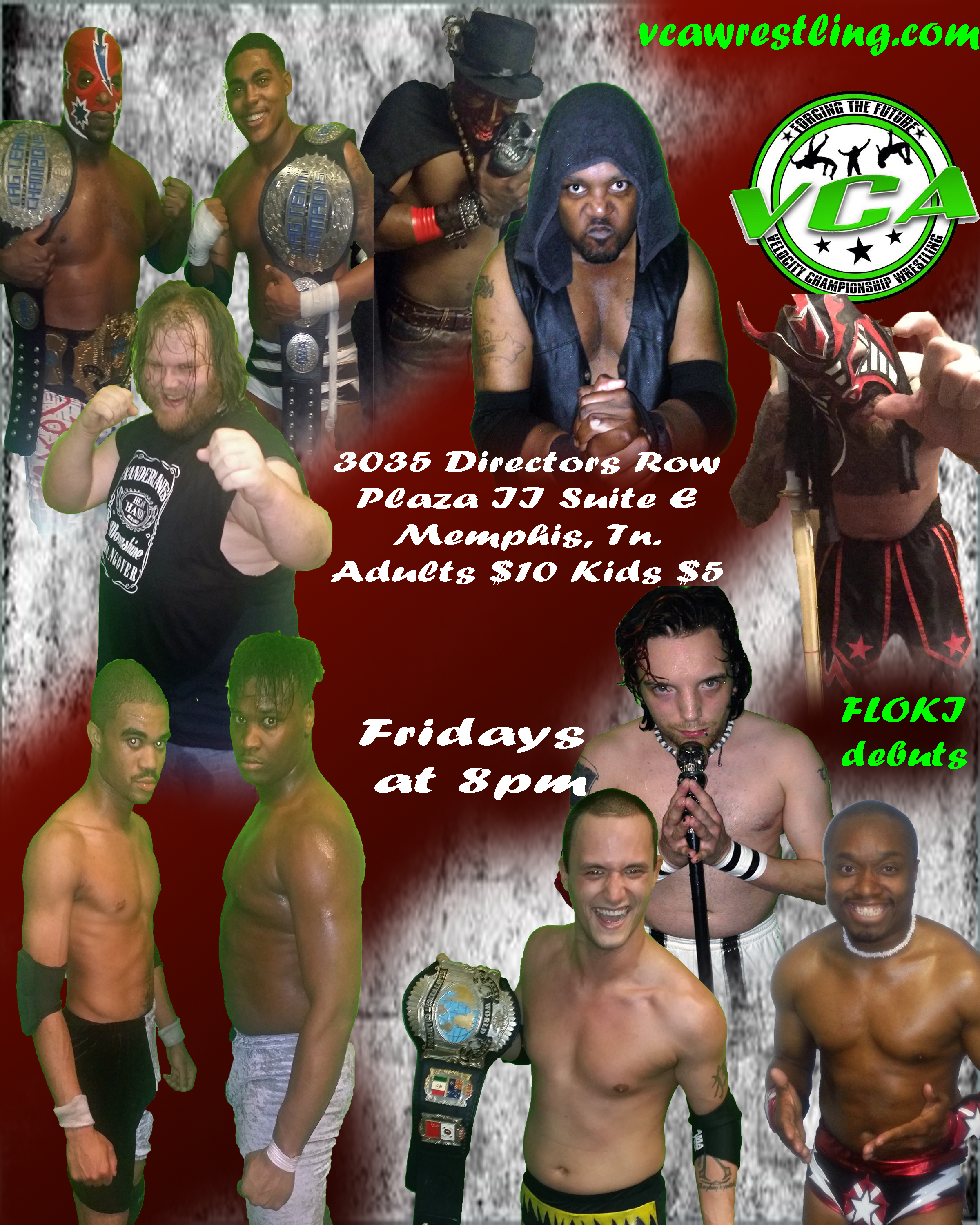 This past Friday night was an explosive night as fans jam packed the VCA studio leaving little room for walking and standing room only. The crowd ranged from elders to toddlers with every single fan clinging to their seat with excitement.

Jason Hall, the voice of the company and head announcer, kicked the show off by reminding everyone Sunday, August 2nd is the Charlie Parks Tribute Show. Hall revealed three guest were already confirmed and those guests are Antwane Wise, Reno Diamond, and Dj Stunner.

Terra told Chris she had been watching him lately and she had been wrong about him. Rae informed Evans he was a real man unlike his friend/partner Allen Dalton. Terra would then persist to rub her hand up and down Chris’ body making Chris and fans a little uncomfortable. Rae informed Evans if he wanted to make it in the wrestling business he’d have to give something up.

Evans, who had a perplexed look on his face, asked Rae what she meant and Rae replied by telling Evans he knew what she meant. Evans kindly declined Terra’s advance telling Rae he’d like to climb the ladder on his own and do things the right way. Terra didn’t take the news lightly and told Evans he will learn to do things her way and he’d begin to learn tonight. Terra informed Evans he’d be taking on her new and improved enforcer Big Tiny.

Now that Evans and Rae had exited the studio, Malik would enter the studio for words of his own. Malik said he was so close to becoming Juniorvative champion last week against his pal Allen Dalton, but Malik admitted Dalton was the better man that night. As Malik made this statement, smoke flared up in the studio and in entered Crazy Jack.

Malik didn’t take to kind of Jack interrupting him as many thought Malik would challenge Dalton again for the Juniorvative championship so Malik challenged Jack instead. The two would compete in a simple five minute match, but this would soon end due to Terra Rae. Rae’s voice echoed from the back telling Malik to get out of her ring because he wasn’t in charge of booking matches. Malik angrily left the ring fearing for his job if he didn’t, but Rae wasn’t finished.

Terra informed the live audience the match that was scheduled to take place would now take place which featured Crazy Jack versus a returning Cymba. Cymba didn’t waste any time as he comprehended Jack was already weak and drained from the bout earlier. After failing to finish Cymba off with the Claw, Cymba would drill Jack to the mat with the Twist of Fate getting the win for the evening.

The third match was opened by Brooks and Jake who’d occupy the ring. Brooks would cut a promo telling everyone Anthony Payne was not the man they thought he was. Brooks instructed the production room to roll footage of an alleged woman claiming to be Anthony Payne’s babymomma. As if that wasn’t bad enough, Payne’s alleged baby would also be featured in the video. The baby consequently had a Mohawk.

During the footage Brooks would pursue to ask the unknown woman would she think of placing Payne on child support for not taking responsibility, but the woman answered by telling Brooks she wouldn’t and that she’d continue to support her child on her own. Brooks ended the short video by telling everyone Payne was a dead beat which caused Payne to erupt from the back and into the ring.

Payne, acting off emotion and anger, entered the ring forgetting about Brooks’ reinsurance policy who happened to be Jake. The two pounded Payne to the mat until the Juniorvative champion ran out to make the save. That’s right, Allen Dalton entered the ring unloading on Jake causing the big man to take the high road. This would be the beginning of match three.

The match seemed to be controlled by Brooks and Jake as Payne made countless mistakes due to him wanting to get his hands on Brooks. The match even took a turn for the worse when Dalton’s nose was began bleeding, but this too wouldn’t be enough to stop the fan favorites. In the end, it was all Payne and Dalton. Payne finished Jake off when he scored with the Ice Breaker.

After the match Payne was still riding off emotions as he drilled Brooks to the mat with a t-bone suplex. The two then fought into the huge crowd causing referees, Dalton, and Jake to separate the two. This heated feud is far from over and there’s still no confirmation on whether or whether not Payne is the father of the alleged woman’s baby. We will stay on this story!

The fourth match consisted of Chris Evans taking on Big Tiny. This match stemmed from earlier when Evans didn’t except Terra Rae’s offer in doing what it takes to excell in the business. Evans stated he wanted to make it the right way instead of cheating himself and the fans.

During the match Evans gave it his all, but Tiny would prove to be too big and strong for Da Kyd. The former number one contender for the heavyweight championship showcased his power by punishing and wiping the floor with Chris every chance he got. When Evans finally got a break, Terra got involved. Rae grabbed the leg of Evans preventing him from completing a move but Evans would kick away from the boss. Tiny would try to take advantage of Evan’s attention being off, but Evans was ready. Evans would quickly moves out of Tiny’s path and roll Tiny up for the win.

Evans might have got lucky this time, but we can assure everyone this one isn’t over. Some even say Tiny’s shoulder wasn’t fully down, but as for now the referee’s decision is final. As for Evans and Rae, we will have to continue to watch this bizarre situation unfold.

The main event of the evening featured Syn and the Bearded Dragon Floki taking on VCA heavyweight champion Kaptain Justice and Xander Raines. Before the contest backstage, Raines asked Justice for the privilege of teaming with him because he was not yet done with Syn. Justice accepted Raines offer and everyone would think the two would be on the same page.

Towards the end of the match Justice reached out to tag Raines, but Raines responded by giving Justice the finger and jumping from the ring apron. This would lead to Justice being finished off by Syn and Floki’s devastating double Curb Stomp.

There is so much going on leading up to the Charlie Parks Tribute Show and no one can afford to miss a thing! Is Brooks telling the truth about Payne being a dead beat father? Will Terra Rae finally get what she desires from Chris Evans? Can Xander Raines take the heavyweight championship from Kaptain Justice after Justice has had it for so long? Find out this and more this Friday as we continue on our journey to the Charlie Parks Tribute Show taking place Sunday, August 2nd at 7pm!