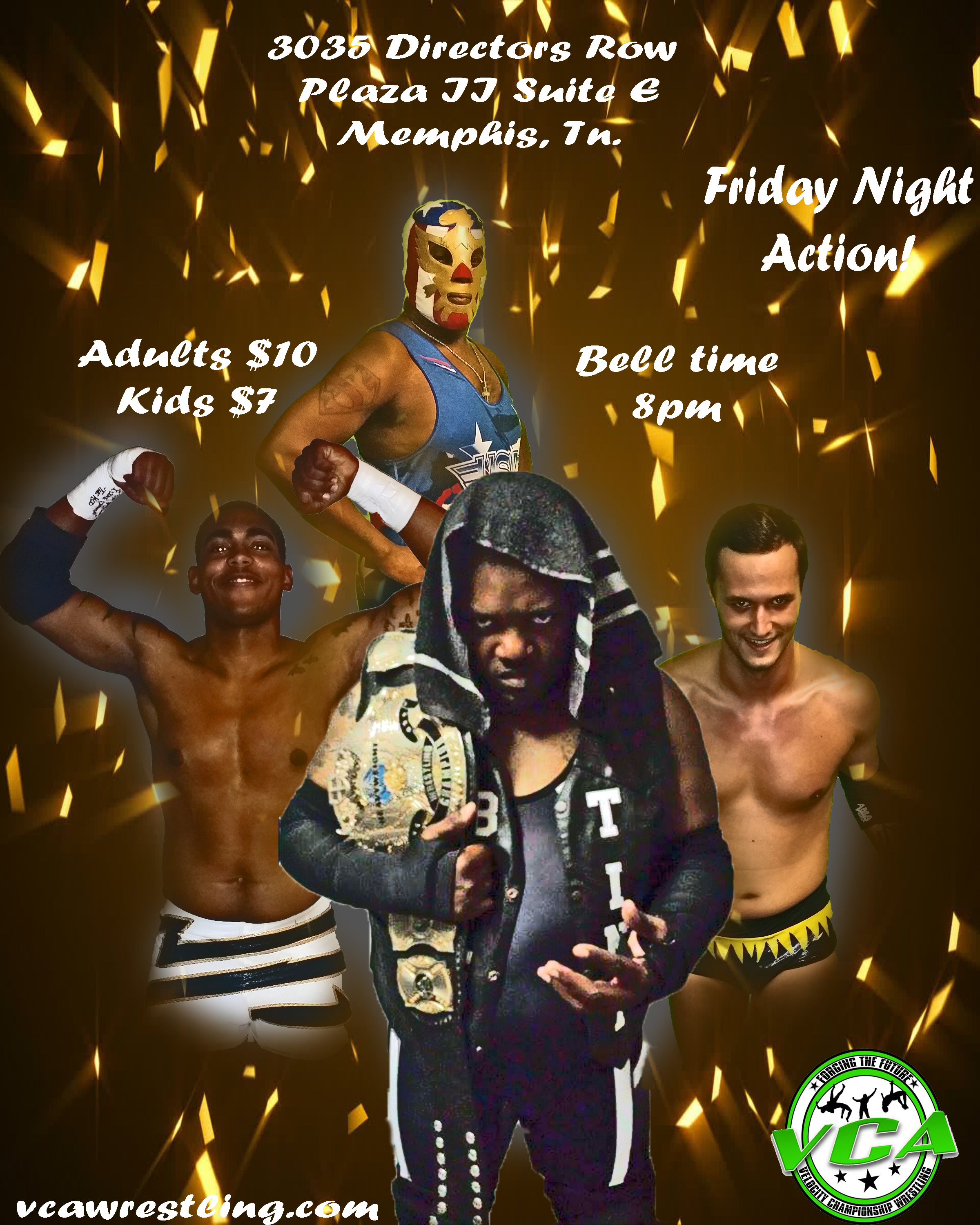 If you missed this past Friday’s event, you missed out on a ton of action and a lot of drama!

The night kicked off with Terra Rae and the VCA heavyweight champion Big Tiny. Rae informed everyone that after speaking with Tiny on his match with Kaptain Justice on November 6th she decided not to allow the two to compete in a Lumber Jack match. Rae claims she did this to prove to the World that Tiny can successfully defeat Justice on his own. Tiny, who’s normally a man of few words, told Justice that at the anniversary show November 6th he’s going to beat the red, white, and blue off his ass!

Tiny competed against Malik in the opening bout. This was a no brainer as Tiny proved Malik was no match for a mammoth of a man as large as himself. Everytime Malik mounted some offense, Rae would get involved throwing Malik off once again. When it looked as if Malik would pull off an upset by delivering the 450 Splash, Brooks’ music began to play, but there was no Brooks. This brief distraction would be enough in allowing Tiny to take Malik’s head off with a Clothesline from Hell and get the victory for the evening. No one is certain on the playing of Brooks’ music and many say it was purely an accident.

Dalton made his way into the studio next and informed Syn since he cheated in beating him the week before he was issuing a challenge to Syn Friday, November 6th at the anniversary show. Dalton said he wants to end things once and for all by challenging Syn to a First Blood match. Dalton then challenged Brooks for the Juniorvative championship.

Brooks and Dalton had a classic match, but in the end it was all Brooks. Brooks dominated the entire match and looked to put Dalton away with the Sharpshooter, but Dalton calculated the move and placed Brooks in the Crossface. Not long after, Syn tried interfering, but Dalton released the Crossface on Brooks and tried placing the move on Syn. Syn quickly scrambled getting out the ring. The referee threw the match out, but Dalton gestured to Syn that he was so close to locking in the Crossface.

Chris Evans was up next! Evans informed the live crowd that he was set on challenging Brooks for the Juniorvative championship last week but Jake got in it claiming that Evans had to go through him first. Evans told Jake if that’s what he’d have to do then that’s what he’d do.

Jake shortly entered the ring and told Evans he still didn’t like him and he’d do every wrestler a favor by kicking Evans out of wrestling for good. The two quickly began fighting afterwards.

Although Jake had some impressive moves, Evans would be the victor as he made Jake tap with the Chris Cross. Being a sore loser, Jake attacked Evans after the match leaving Da Kyd for dead.

The main event featured Syn and the number one contender for the heavyweight championship Kaptain Justice. Before competing Syn informed everyone that he would accept Dalton’s match November 6th and would make Dalton bleed like a stuffed hog all over the studio.

Justice and Syn battled for about 10min, but the end was inedible as Justice drilled Syn to the mat with a Chokeslam. Just as Justice had done the previous week, Tiny hit the ring and attacked Justice causing yet another match to be thrown out. With Justice laying flat on his back and looking at the ceiling, Tiny stood over Justice and informed Justice that at the anniversary show November 6th he’s awaken a sleeping monster and the end is near.

As you’ve already heard, VCA’s anniversary show is Friday, November 6th at 8pm. All tickets for the event is only $10. Justice will take on Tiny for the heavyweight championship and Syn and Dalton will compete in a First Blood match. This Friday, adults pay only $10 and kids $7. Bell time 8pm.