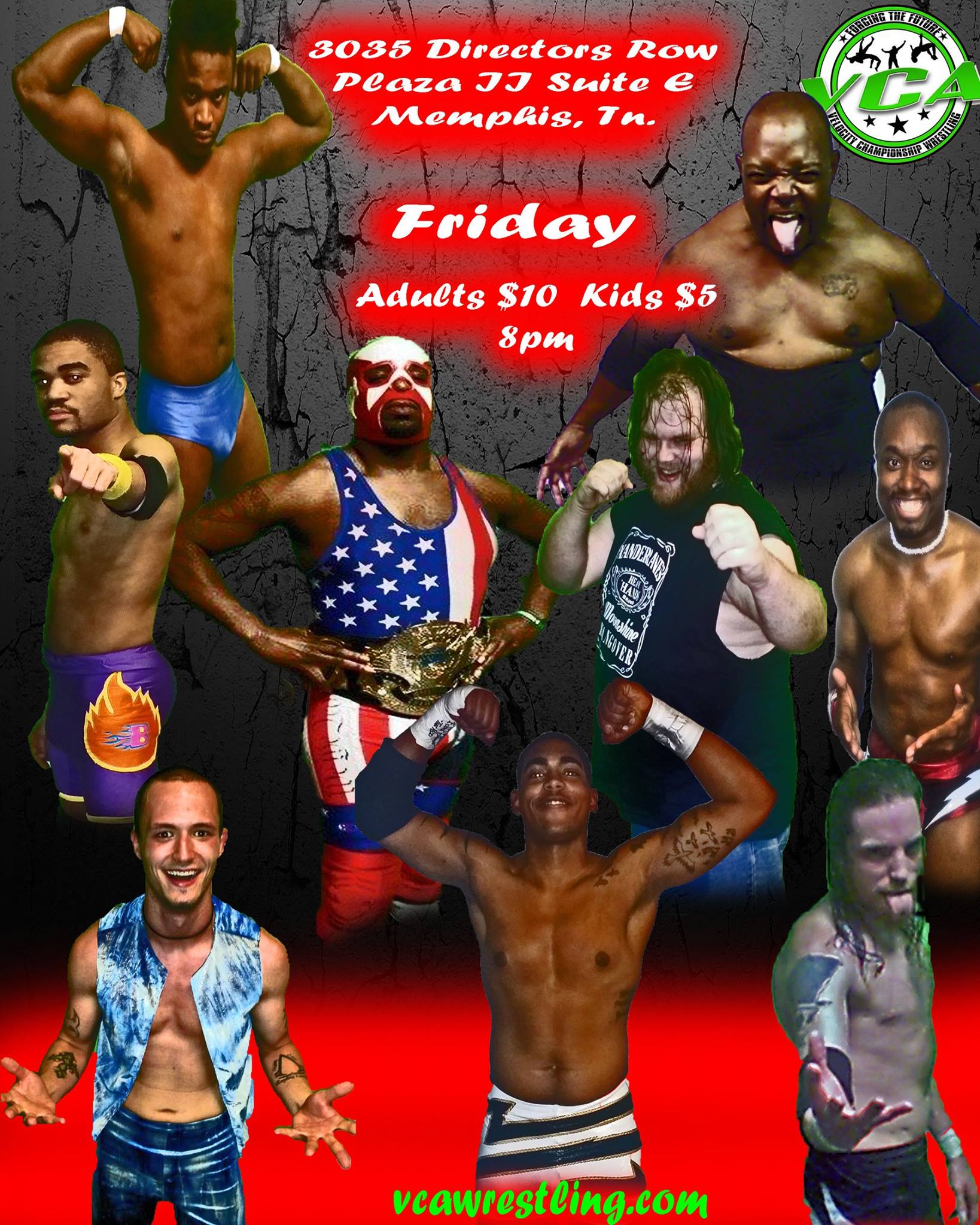 VCA is the place to be every Friday night at 8pm. Adults only pay ten bucks and kids pay less by paying five dollars. No one can beat our Friday night prices so bring the entire family out for a treat.

This past Friday the VCA fans witnessed the Brooks and Allen Dalton saga escalate to an all time high. Brooks, who was caught cutting a backstage promo, said Friday, September 4th he was going to show Dalton who’s the best by defeating Allen in a fifteen minute Iron Man style submission match. Dalton, who also cut a backstage promo, informed Brooks he was going to beat Brooks with his own finisher, the Sharpshooter! This would be the ultimate disrespect to Brooks to be defeated with his own finisher. Dalton will place his Juniorvative championship on the line Friday, September 4th.

This past Friday, Brooks competed against his former partner Anthony Payne. Payne, being the overly powerful star he is, drilled Brooks to the mat with multiple German Suplexes, an Overdrive, and a sick Enseguerer that could be heard outside the door of the studio. Brooks wouldn’t be put away easily and scored with a bodyslam, a flying forearm from the top ropes, and a leg lariat. Brooks tried his luck once more by winning with the same maneuver he put Payne away with weeks ago at the Charlie Parks Tribute show, but Payne was ready as he reversed the roll getting the win for the evening. Brooks was so upset by the loss he announced this Friday he and Payne would square off in a two out of three falls match to see who’s the best.

Dalton himself successfully survived a triple threat non-title match featuring himself, Suicide, and Syn. Before the match kicked off, Syn wanted everyone to know he’s neither bothered or worried about the greatly hyped Mike Cobb. Syn claims he’s seen better and there’s no one in the area capable of out wrestling him because he’s the best. Syn said on September 4th he’s going to send Cobb back to Nashville with his tail tucked between his legs in shame.

The match itself had a series of moves making it almost impossible for people to keep up with the uptempo bout. Fans were introduced to a double headlock driver, a moonsault fallaway slam, a diving bulldog, a headlock neckbreaker into a flipping neckbreaker, and more! With all this action going on, one can see why it was hard keeping up with the action. But, in the end Dalton walked away with the victory after Syn reversed a figure four locked applied by Suicide and Dalton took advantage of the situation by applying the Crossface. The two moves were too much for Suicide to handle so he had no choice but to submit. Syn felt he should’ve won the match, but the referee awarded the match to Dalton instead. Next week Dalton is scheduled to take on Malik in a non-title singles match.

Chris Evans entered the studio and informed everyone he was tired of Terra Rae’s games and there would never be anything between the two. Evans also reminded everyone the previous week he was about to make Xander Raines submit, but Evans says Rae got involved. Hearing this in the back, it prompted Raines to entere the studio and tell Evans he was delusional to think he was about to tap. Raines informed Evans if he didn’t leave the ring he’d whip his ass. Evans told Raines no and the two began battling starting an impromptu match.

Evans tried his best in battling the beast from down south by delivering a missile dropkick, but Raines was too powerful and still took most the match. Raines drilled Evans with a Big Bang, a running Senton, and a massive elbow. Evans was lucky enough to lock the Chris Cross, but this too wouldn’t be enough to put the big man down. Raines over powered Evans and connected with the Moonshine Hangover getting the win for the evening.

After the match fans thought the worse had come and gone for Evans, but this wasn’t true as Terra Rae entered the studio with a big smile on her face. Rae entered the ring and arrived to on out of it Evans position giving the wounded star a huge kiss on the lips. Fans couldn’t believe it! Evans soon realized what happened and was pissed.

The final match of the evening was a non-title triple threat contest between Malik, Big Tiny, and the heavyweight champion Kaptain Justice. Tiny scored early in the contest by plowing through Malik and Justice with a double shoulder tackle. Tiny also scored with a double clothesline, big elbow, and leg drop. The heavyweight champ wouldn’t sit quietly as he delivered a flying shoulder tackle, a diving double axe handle from the inside to the outside, and his signature big boot. In the end, Terra tried getting involved once more, but Justice caught her coming in. Rae claimed she wasn’t about to do anything, but fans and Justice knew better. Justice threatened to hit Rae, but Tiny was waiting in the wings. Tiny rushed towards Justice but Justice moved causing Tiny to almost squash Rae in the corner. Luckily for Terra, Tiny put the brakes on making sure he didn’t connect. As Tiny made sure Rae exited the ring in a safe manner, Justice delivered the Falls from Justice. Just as Justice was about to get the pin, Raines entered the ring breaking the count.

Xander hammered Justice to the mat and prepared to deliver his second Moonshine Hangover of the day, but Evans entered the studio preventing Raines from going through with the move. Evans unleashed on Raines but was soon cut off by Tiny. Tiny and Xander hammered Evans to the mat, but failed to realize Justice had recuperated. Justice attacked Tiny and Raines freeing Evans and allowing Evans space to get in on the action. The two fought off the two colossal monsters sending them to the outside.

Before ending the show, Rae informed everyone next week Justice and Tiny would compete against Big Tiny and Xander Raines in tag action. Justice and Evans definitely have a “Big” obstacle to overcome this Friday!

Also scheduled to appear this Friday, Suicide, Syn, and many more! Remember, adult tickets are $10 & kids tickets are only $5. Bell time 8pm. Bring the family out and enjoy the best wrestling action in Memphis, TN!