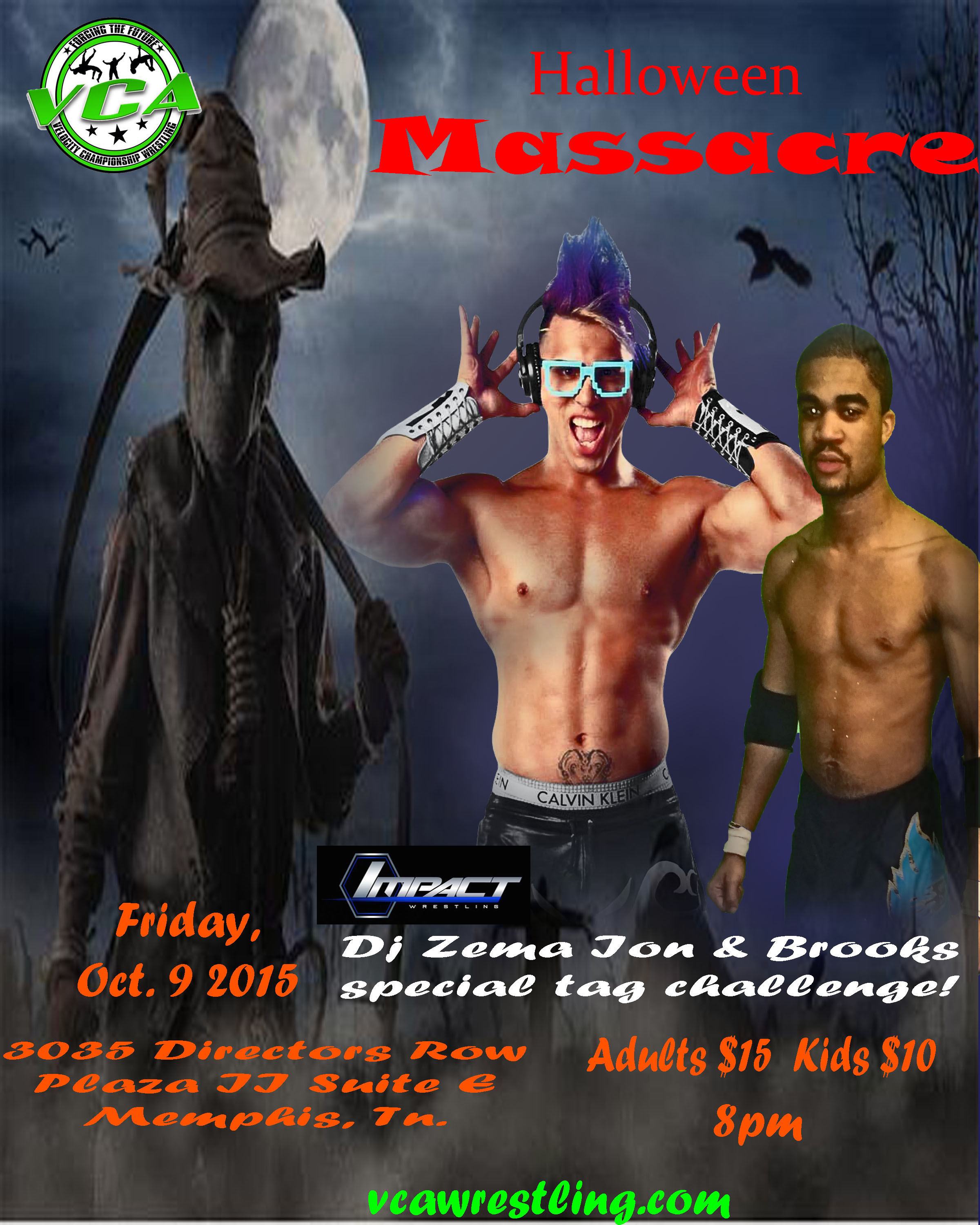 The event kicked off with two individuals that are no strangers to one another that being Syn and Allen Dalton. Syn challenged Dalton the week before claiming Dalton’s win weeks ago was due to pure luck. Syn insisted Dalton could never do the same again, but the VCA audience witness the total opposite.

Not only did Dalton win, but Dalton defeated Syn with one of Syn’s popular moves, the super-kick! Syn argued he got his shoulder up before the three count, but the referee stated he didn’t see it. Syn commented saying he’d address the situation at this Friday’s event.

The second match featured two bizarre individuals, Crazy Jack and Jake. The match wasn’t a pretty one as the two spilled the action out onto the floor ramming one another from one end of the studio to the next. In the end, Crazy Jack walked out with the victory after slamming Jake to the mat with the Wasteland.

The attraction match was next featuring TNA Impact Wrestling’s Dj Zema Ion and Brooks against Anthony Payne and Malik. The match opened with Brooks and Payne showing off some impressive moves. Malik and Dj Z were next and the two entertained the crowd by showing off some dance moves. Towards the end of the match Malik entered the ring taking both Ion and Brooks down. Malik even scored with his Lights Out finisher on Ion, but Brooks broke the count. Payne too showcased his finisher, the Ice Breaker, but couldn’t capitalize on a pin being that he wasn’t the legal man. The match would result in a disqualification after Brooks nailed Malik in the back of the head with some brass knucks. Making matters worse, Ion snapped Payne’s arm with a gruesome submission move and Brooks put a chair to Payne’s already damaged arm.

We’ve been told Payne suffered a very bad injury and his return is unlikely. We here at the VCA office wish Payne a speedy recovery.

The semi main event was between Kaptain Justice and Xander Raines.  Raines was like a mad man in this match tossing Justice around like a rag doll. Raines already felt Justice didn’t respect the business, but Raines was even more pissed that the heavyweight championship wasn’t on the line due to Justice being beat by Big Tiny weeks before. Raines put in work by dropping elbows, issuing clothesline, and even executing the “Roller.” Justice wouldn’t go down easy as he nailed a shoulder tackle, leg drop, and a Falls from Justice, but all this wouldn’t keep the big man down.

The main event was for the VCA heavyweight championship between champion Big Tiny and challenger Chris Evans. Tiny was a monster in this match almost beheading Evans a couple of times. Evans tried his hardest to fight the monster off, but Tiny was just too big and powerful to be moved.

Evans caught a break after Tiny missed a splash in the corner. Evans locked his finisher the Chris Cross in and it seemed to be night night time for Tiny. Tiny began to fade, but Terra Rae wasn’t about to give Evans the win. Terra took off her high heel shoe to nail Evans, but Evans moved causing Rae to knock out Tiny. Tiny was out! Evans went to cover Tiny, but Tiny kicked out at a split of a second. Evans knew one more move could give him a win, but he must climb the top ropes to connect. Terra grabbed hold of Evans leg hoping to prevent him from connecting, but Evans shoved her off causing Rae to hit the floor. This would be enough time to allow Tiny to swat Evans out the air like a fly. Tiny retained the heavyweight championship after delivering a Clothesline from Hell.

Although Evans didn’t win the match, Evans said he has his eyes sat on becoming Juniorvative champion and plans on addressing the issue this Friday night. Tiny on the other hand has to worry about two contenders for his championship, Dalton and Justice.

With the Anniversary show quickly approaching there’s no telling what might take place. Join us this Friday for VCA’s weekly show at 8pm.