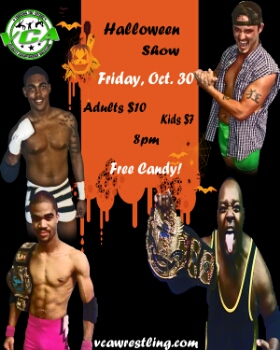 Terra Rae just informed us that this Friday she will be teaming with Big Tiny in taking on Kaptain Justice and Allen Dalton.

Rae insists she has nothing to worry about because Big Tiny has beaten both participants numerous times and has guaranteed her Dalton nor Justice will lay a finger on her. Rae claims she’s looking forwards to the match because she can finally show everyone the type of men Dalton and Justice really are.

Also, Syn will go one on one with Da Kyd Chris Evans. Syn said he’s going to give Allen one last opportunity to back out of their First Blood match at the Anniversary show. Syn said if Dalton is smart he’d put his ego aside and beg Terra Rae to drop the match.

Malik is said to be taking on Jake this Friday night. We’re hearing that Malik will address the playing of Brooks’ music during his match which also caused him the match with Big Tiny. Hence, Jake is supposed to inform everyone on the type of match he and Chris Evans will be having at the anniversary show.

Join us this Friday night for a night of great action including Brooks, Spiderman, and more! Don’t forget there will be FREE candy given out this Friday too. The action begins at 8pm. Adults pay $10 & kids pay only $7.