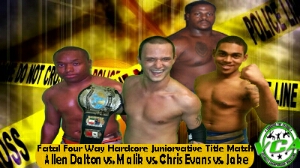 When we think of a Championship match, normally we think the Champion must lose the bout to lose his championship and vice versa. However, there are some circumstances where this isn’t entirely the case; and this is definitely one of those times. In a fatal four way, any of the opponents can submit or be pinned to become the new champion. The current champion actually doesn’t even have to be part of the deciding fall.

Not only are the stipulations of a traditional fatal four way in place, this match was also announced to be a Hardcore match. This means anything goes and all weapons are legal. As if that wasn’t bad enough for the champion, Dalton will be defending his championship against his best friends, Malik and Evans. This will have to take a toll on the mindset of the champion heading into the match.

One thing is for sure, friends or not all of these men will do whatever it takes to walk out with the Juniorvative Championship. You can believe there will be broken bodies and plenty of plunder and debris when the smoke clears. The question is who will walk out with the gold? We will all witness the answer to that question this Friday on May 1st as Velocity Championship Action presents LAW & ORDER!

Tickets for adults are $12 and kids are $8. Belltime is at 8 pm and it will be taking place at VCA Studios. VCA is live in Memphis, Tennessee every Friday at 3035 Director’s Row Plaza II Suite E!