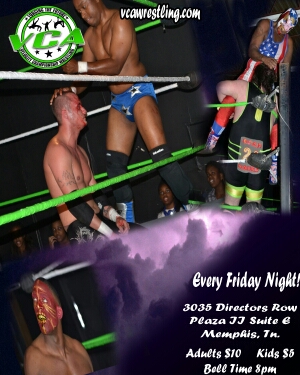 Here at Velocity Championship Action we have witnessed some very unique and entertaining matches. Things like where weapons have been hung from poles, Ladder Matches, First Blood and the list goes on. It is always exciting to bear witness to the first of something and at VERDICT. The crowd will bear witness to a Heavyweight Championship match. But this won’t be an ordinary match at all. VCA is going to present the first every in history Ironclad match.

The rules have been set in stone and it will not be pretty for the competitors. This is the kind of match where only the fans win. In this match up, chairs, ladders, pipes, signs, crutches, and any other item of a metal nature is allowed to be used against your opponent. However, if any weapon not made of metal is used such as tables, doors, fire, or anything of that nature is used the competitor will be immediately disqualified.

In this match up, falls and submissions will count anywhere; on the floor, in the crowd, in the office, in the locker, parking lot, it could literally end anywhere at any time. The true question is how does any kind of superstar prepare for a match this brutal? One thing is for sure, both men will walk into a fight they will never be the same from after. Will we witness the Dawn of the Hardcore Heavyweight Champion, Jake? Or will Kaptain Justice even further solidify his Heavyweight Championship reign? Everyone will have to come out to witness the spectacle of VERDICT to find out!

Velocity Championship Action is live every Friday night in Memphis, Tennessee. It is a family friendly, entertaining wrestling show with great concessions and an autograph table for meet and greets during intermission where merchandise such as shirts, pictures, toys, and much more is on sale at every show. Come bear witness to the most entertaining show around the entire Mid-South and surrounding areas.