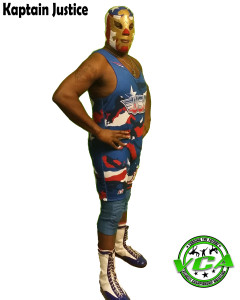 It was an astonishing night when Velocity Championship Action presented Extravaganza! Many would say the night already presented the talent and effort to forge the future of the wrestling paving the way for the future of companies all over the Mid-South and everywhere. Recently, the entire company pulled together for the biggest show of the year, Extravaganza, which featured the debut of Kevin Zion and former WWE star himself, Carlito. However, something no one could have predicted, as Crazy Jack closed in and secured his victory against Adonis Staples, Kaptain Justice emerged and send a direct message to Jack as he gave him a thunderous Chokeslam. After sending this definitive message, the following week he would face off with Jack, only to secure the victory with the very same Chokeslam he leveled Crazy Jack with the prior week at Extravaganza. Now with the momentum fueled by natural 100% American Patriotism, Kaptain Justice will challenge longtime nemesis this week, the 300 pound, Japanese Warrior, Chacatu. Chacatu has been a dominate foreign war machine fueled by his hatred for American’s and their culture, he looks to destroy the trooper for American’s everywhere and the poetic American Hero himself, Kaptain Justice. The true question lies in will Justice carry the momentum and America on his shoulders to finally show the USA is dominate over Japan and their sacred Warrior, Chacatu? Or will Chacatu once again show Japan is indeed number one?! This and more this Friday and every Friday as VCA presents live action weekly! So come out and check out the greatest wrestling action and family fun in all of Tennessee, Velocity Championship Action Wrestling located at 3035 Director’s Row Plaza II, Building E live in Memphis, Tennessee every Friday night and the bell time is 8 P.M. Support VCA and be sure to check out Velocity Championship Action on Facebook and their Youtube channel as they lead into the new year.