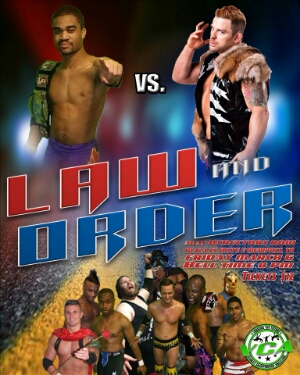 This Friday, March 6 VCA presents Law and Order featuring Nick Stanley versus Xander Raines. Xander informed the VCA audience this past Friday that nothing was going to stand in the way of him becoming VCA champion. Raines claimed the one thing standing in his way was the fact that he had to take on Nick Stanley in singles action before the Battle Royal. Raines urged everyone not to worry because he was going to put the wannabe Romeo out of his misery. Also taking place that night, Black Ice Anthony Payne will go one on one with the returning Kevin Zion. Payne stated that he didn’t care how popular Zion was the last time he was in the studio, but Payne promised the beating would be one to remember. Crazy Jack informed the VCA audience that he would be taking 14 other souls this Friday night and sending them all the hell becoming the first VCA heavyweight champion. Before Jack makes it to the Battle Royal, Terra Rae stated that Jack would be in singles action against Andres Sanchez. Sanchez wants more than anything to get his hands on Payne or Brooks for turning on him, but looks like that might not be happening due to  Crazy Jack standing in his way. With the exception of Allen Dalton, no one knows their spot in the Battle Royal. So far the Battle Royal will consist of Allen, Malik, Brooks, Xander, Big Tiny, Sanchez, Crazy Jack, Payne, Brooks 2, Cymba, Zion, Chris Evans, and Kaptain Justice. There are still two spots remaining and Terra has yet to reveal the final two. Terra stated she wouldn’t be revealing the order of the Battle Royal until the night of the event due to wanting to keep everyone on their toes. This past Friday a brawl broke out between the VCA roster and the sole survivor was Allen. Allen dumped Malik out last and the two became involved in a heated war of words as Malik claimed that Dalton was supposed to be his friend yet threw him over the ropes while not looking. Cymba said it best when he said that the Battle Royal would be every man for himself and there weren’t any friends. Many have inquired about TNA Impact Wrestling’s Davey Richards and Tony Kozina’s whereabouts, and the two were scheduled to come in this Friday but canceled their booking with VCA to acquire another booking in Canada. We sincerely apologize to our fans for Richards and Kozina’s cancelation and look forward to continue to serve the fans of the Mid-South with the best wrestling action around.