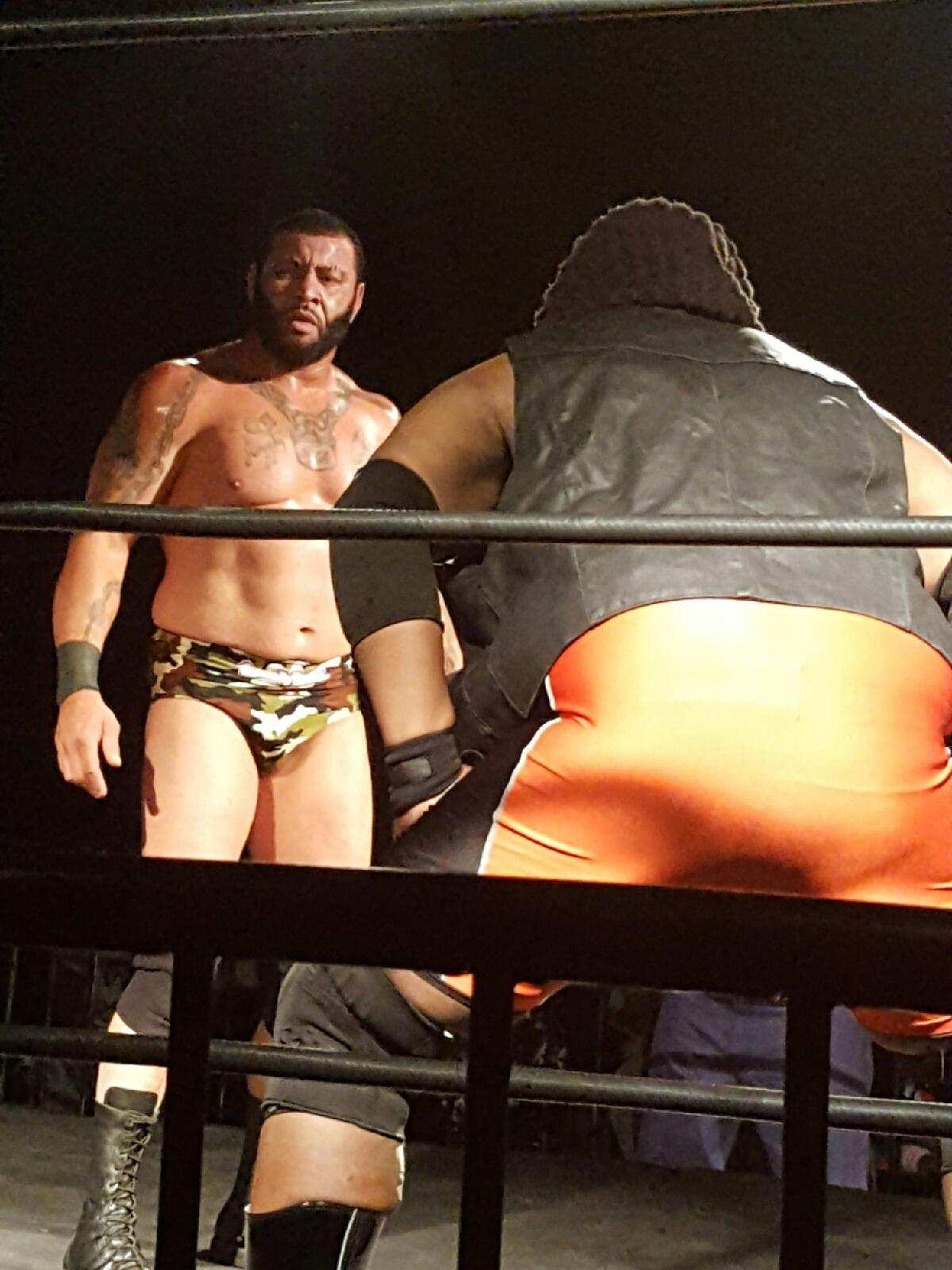 VCA’s spring spectacular, MegaFest, was full of excitement and action from the opening bout til the final match.

The night started off with the number one contendership for the heavyweight championship match between Chris Evans and Big Tiny.

Evans showed lots of drive and determination, but there was only so much the 2015 Rookie of the Year could do against the monster. In the end, Tiny drilled Evans to the mat with a double handed chokeslam powerbomb securing his spot as the new number one contender for the heavyweight championship.

The second bout featured a Bunkhouse Brawl match between “The Grenada Beast” Xander Raines and Johnny “The Sleeper” Gilbert.

The match was full of weapons including thumb tacks, pans, baseball bats, glass frames, and more! Both men took pride in pounding one another both ending up cut and bruised. Raines took the majority of the match, but Gilbert did find an opening blasting Raines in the back of the head with his chain. The chain shot still wasn’t enough to keep the big man down. Gilbert pursued locking in the Camel Clutch, but Raines fought the move off. Raines finally put Gilbert away with his Moonshine Hangover.

The third match was one of the most anticipated matches of the night and that was the win or be fired match between Terra Rae and camera woman Amber.

To everyone’s surprise, Amber had been training and preparing for the match as she executed an impressive bulldog out the corner. Rae, who everyone’s familiar with, fought back by connecting with a back elbow, clothesline, and flatliner.

Terra had the match won, but Rae refused to cover Amber pulling her up by the hair and claiming Amber needed to be punished more. This would turn out to be a fatal mistake by Rae.

Rae left the ring to retrieve a hammer which ironically is the same hammer Terra utilized the week before. Terra tried bashing Amber’s head in, but the referee stepped in snatching the hammer from Rae. While Rae and the referee argued about the weapon, Amber creeped behind Rae applying a submission getting the win for the evening. After the match Rae slapped and delivered a low blow to the referee for his incompetence.

One part of the double main event was set to place next, and that was the five minute challenge match for the VCA heavyweight championship between Rodney Mack and Andres Sanchez.

Throughout the entire match, Sanchez played it smart by running and dodging Mack. Sanchez kept the game of cat and mouse up as long as he could, but eventually ran into a brick wall and that brick wall was Mack.

From there, Sanchez was tossed around the ring like a rag doll. Fans felt the end was near for Sanchez, but Sanchez found another burst of energy after connecting with some spinning headscissors.

The fans began praying and wishing that Sanchez could ride the clock out, but this too was short lived. Mack connected with a spear at the 30 second mark getting the win for the evening. Sanchez was almost there, but everybody know almost doesn’t count.

After the match, Mack looked as if he wanted to do more, but Big Tiny, the new number one contender, entered into the studio and then into the ring. Mack and Tiny had an intense stare down ending with Mack leaving the ring and ignoring Tiny’s presence.

The final and main event match between Impact Wrestling’s DJ Zema Ion/Juniorvative champion Brooks and Malik/Allen Dalton was next.

From the start, Malik and Dalton couldn’t get along. The two were seen arguing and fighting for a good two minutes before the match took place.

The match itself would be a good one with moves such as frankinsteiner, springboard elbows, springboard dropkicks, cutters, and more!

Throughout all the excitement of the match, Malik and Dalton were able to secure the victory after Malik nailed DJ Z with a Brainbuster.

After the match Dalton tried shaking the hand of Malik by extending his hand, but Malik walked off leaving Dalton in the ring alone. Has the friendship of Malik and Dalton been ruined?

Find out this and more at VCA this Friday at 8pm. Adults tickets are $10 & kids tickets are $7. Also, the VCA heavyweight champion, Rodney Mack, along with Professor P will be in the building.