Recap from this past Friday night 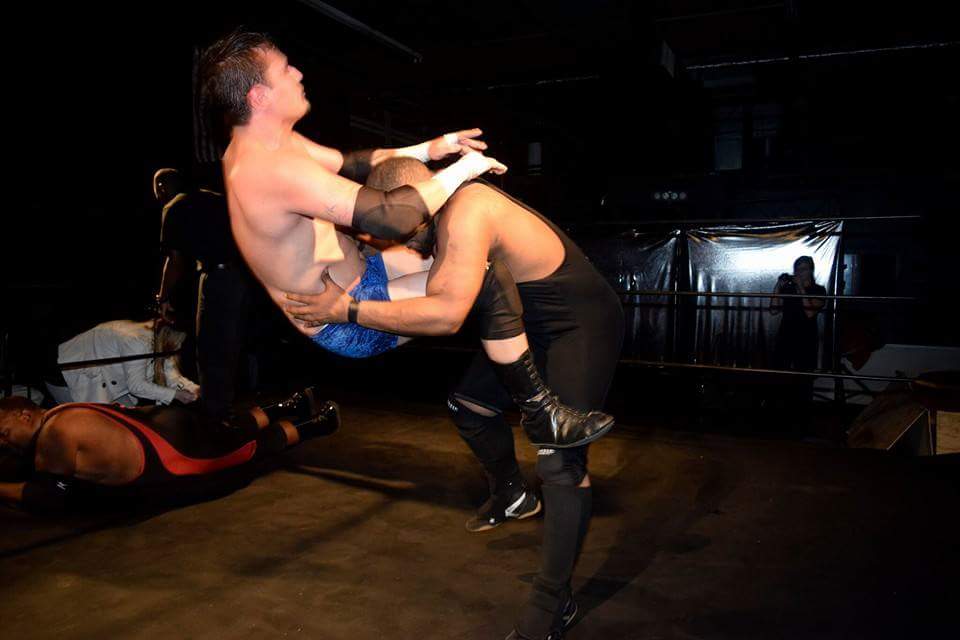 Last night at the VCA studio, the stars of VCA proved they were more than ready for Broken Hearts by not only saying it, but bringing it.

The night kicked off with Johnny “The Sleeper” Gilbert standing in the ring with Terra Rae. Gilbert informed everyone that at Broken Hearts Friday, February 5th everyone’s favorite, Chris Evans, will go nite nite after he nails Evans with a chain in their Chain on a Pole match.

Gilbert explained the objective of the Chain on a Pole match is to climb the pole and retrieve the chain before your opponent. Gilbert added that when a wrestler acquires the chain he’s free to do whatever he pleases with the chain.

Gilbert insisted that everyone will have no choice but to respect him after he’s done with Evans at Broken Hearts and realize he is the future of the company. Gilbert then called for his opponent for the night who turned out to be Malik.

During the contest, Terra Rae, who was at ringside supporting Gilbert, could be seen interfering in the match numerous times upsetting the live audience. Rae got involved by scratching, choking, and distracting the referee.

Even with all this occurring, Malik was able to battle back and nail Gilbert with a Missile Dropkick from the top ropes. As Malik covered Gilbert, Rae pulled Malik’s leg breaking the count. A pissed off Malik yelled at Rae, but failed to realize Gilbert had acquired his chain from the corner. Gilbert clobbered Malik from behind causing the match to result in a disqualification.

As if this wasn’t enough, Gilbert drilled Malik to the canvas with a Spinebuster that could be heard from Directors Row. Shoving the referee out the way, Gilbert applied the Camel Clutch cutting off the remainder of Malik’s air supply. Fans yelled for Evans to come out to help and Evans didn’t disappoint.

Evans rushed from the back to aid Malik, but the damage had been done. Gilbert quickly scrambled out the ring avoiding any contact with the 2015 Rookie of the Year.

The next match featured Allen Dalton versus Crazy Jack, but before the match began Dalton had something he wanted to get off his chest about his match with Big Tiny at Broken Hearts Friday, February 5th.

Allen informed everyone at Broken Hearts it would be in their best interest to get their advanced tickets for $12 and $10 because not only was he going to become heavyweight champion, but he was going to kick Tiny’s ass.

Dalton said now that he knows the 275lbs bully can be beaten after their encounter at Extravaganza there’s no doubt in his mind that he won’t become heavyweight champion. Even with Rae and Gilbert lurking in the shadows Dalton said it won’t stop him from becoming champion.

During the match, Jack showed Dalton he was not one to be taken lightly or overlooked. Jack showed off impressive tactics by not only repetitively slamming Dalton to the mat, but by playing mind games with the Southaven native.

With all the mind games and strength Jack possessed it still wasn’t enough to defeat Dalton. Dalton was able to counter Jack’s double handed Chokeslam and score with an A.D. for the win. This match proved that Dalton was ready for Tiny at Broken Hearts.

The main event of the evening showcased the former champion Big Tiny and newcomer Chris Evans. Tiny, who had heard Dalton’s speech earlier, had a few words to say to Dalton.

Tiny told the VCA audience that they were hyping Dalton up to get his ass kicked at Broken Hearts. Tiny insisted the only thing that would happen would be Dalton laying flat on his back looking up at him as he’s crowned the new heavyweight champion.

Tiny claims that not only will he become heavyweight champion Friday, February 5th, but he’s going to cripple Dalton ending his wrestling career once and for all. Tiny said since he and Dalton have two weeks to meet, for the evening he’d take on Dalton’s best friend Chris Evans.

Just as the two were about to pair off, Rae interrupted the match telling everyone that senior official Dewayne was not going to officiate the match. Rae said the match would have a special referee and that referee turned out to be the Juniorvative champion Brooks.

Brooks is set to defend his Juniorvative championship against Lio Rush at Broken Hearts so Rae gave Brooks the night off. Rae said she wanted her champion to be more than ready for Rush when he arrives.

Fans were outraged as well as Evans! Everyone knew Brooks wouldn’t officiate the match fairly and this turned out to be true as Brooks did not check Tiny before the match but throughly checked Evans.

Throughout the match, Brooks could be seen delivering slow counts towards Evans, but fast counts towards Tiny. There were even some instances were Brooks and Evans began shouting at one another. Brooks had to remind Evans that he was the official and could disqualify Evans at any time.

Near the end of the match Evans finally had a chance after spearing the former champion. Just as Evans executed the move, Gilbert ran out to ringside with Rae.

Evans immediately left the ring and began brawling with Gilbert on the floor, but it wasn’t too long before Tiny left the ring aiding Gilbert in the fight against Evans. Brooks through the match out, but refrained from helping Evans in any way. The two smashed and hammered Evans on the floor before throwing Evans back in the ring in an effort to do more damage.

Right when it would seem that all was loss, Dalton ran out into the studio attacking Tiny. This allowed Evans some offense to take down Gilbert. The two stood tall as they took it to Rae’s henchmen, but Rae would soon get involved by distracting the two.

The distraction worked as Tiny and Gilbert clobbered both Evans and Dalton from behind. The two scooped Dalton and Evans up and drilled them with a double spinebuster. Rae, Gilbert, and Tiny stood over Dalton and Evans with their hands held high showing their victory for the night and maybe their victory at Broken Hearts.

Next week be there as things continue to unfold. We’ve already been told that Xander Raines will return and he’ll be facing Big Tiny in singles action. Also, next week is the last week to get advanced tickets for Broken Hearts. Adults $12 & Kids $10.