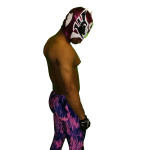 Andres Sanchez, one of the most respectable Juniorvative champions there was in VCA, has told the VCA offices that he’s bored with the current talent of the company. Sanchez revealed that he’s tired of beating the same old people every single week. Sanchez claims that he’s beaten Malik, Allen Dalton, Brooks, Anthony Payne, Kaptain Justice, the Miraculous King, and every other wrestler in the back. Andres claims that if the talent doesn’t step it up he’s going to have to start pulling members of the audience out and beating the crap out of them. Sanchez bizarrely ended the interview by saying, “I think I will do just that!” What can this mean? Does this mean that Sanchez will actually attack a member of the VCA audience? I guess we will find out this Friday on Sanchez’s intentions.