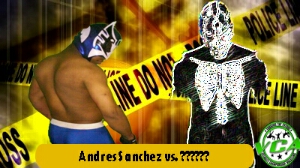 There are often times here at Velocity Championship Action that we have moments that leave us in shock and awe. Things that make us question our own eyes and even beliefs. This is another one of those tales. Let’s take a trip down memory lane.

Leading up to MEGAFEST, Sanchez had been severely targeted by none other than Crazy Jack. Jack sent Sanchez some very eerie messages that caused everyone to begin to question Sanchez. Sanchez would then have Jack strip him of his mask, even further getting inside The Puerto Rican Sensation’s head. It would be an intense rivalry leading up to the biggest event of the spring, but at MEGAFEST, Sanchez would finally silence Crazy Jack.

Everyone, including Sanchez, thought this nightmare was finally over. But then another cryptic message would broadcast over the PA and titantron. This one would inform Sanchez that his fears could not be put to rest. It stated ‘This is not over, I am not Crazy Jack.” This single event would show that Crazy Jack had just been a messenger the whole time. Perhaps an evil even greater that Jack himself.

A second message would be seen later which would feature a man in darkness with lit candles who preached about sins and forgiveness. The figure would go on to call Sanchez a hypocrite and state that Sanchez is nothing more than a sinner. Sanchez was approached by Allen Dalton in question of who Sanchez thought it may be. Sanchez hadn’t a clue but Dalton went on to state no matter who it was, he had Sanchez’s back.

The question is who is this mysterious figure? And what does he truly know about Andreas Sanchez? Where does he come from and what does he intend to do? All we know here at VCA Corporate is that Sanchez better be prepared for anything because May 1st at LAW & ORDER, he will be in for a fight he can’t prepare for. Be sure to get your tickets because you won’t want to miss out. Adults are $12 and Kids are $8!