This Friday night VCA heats up 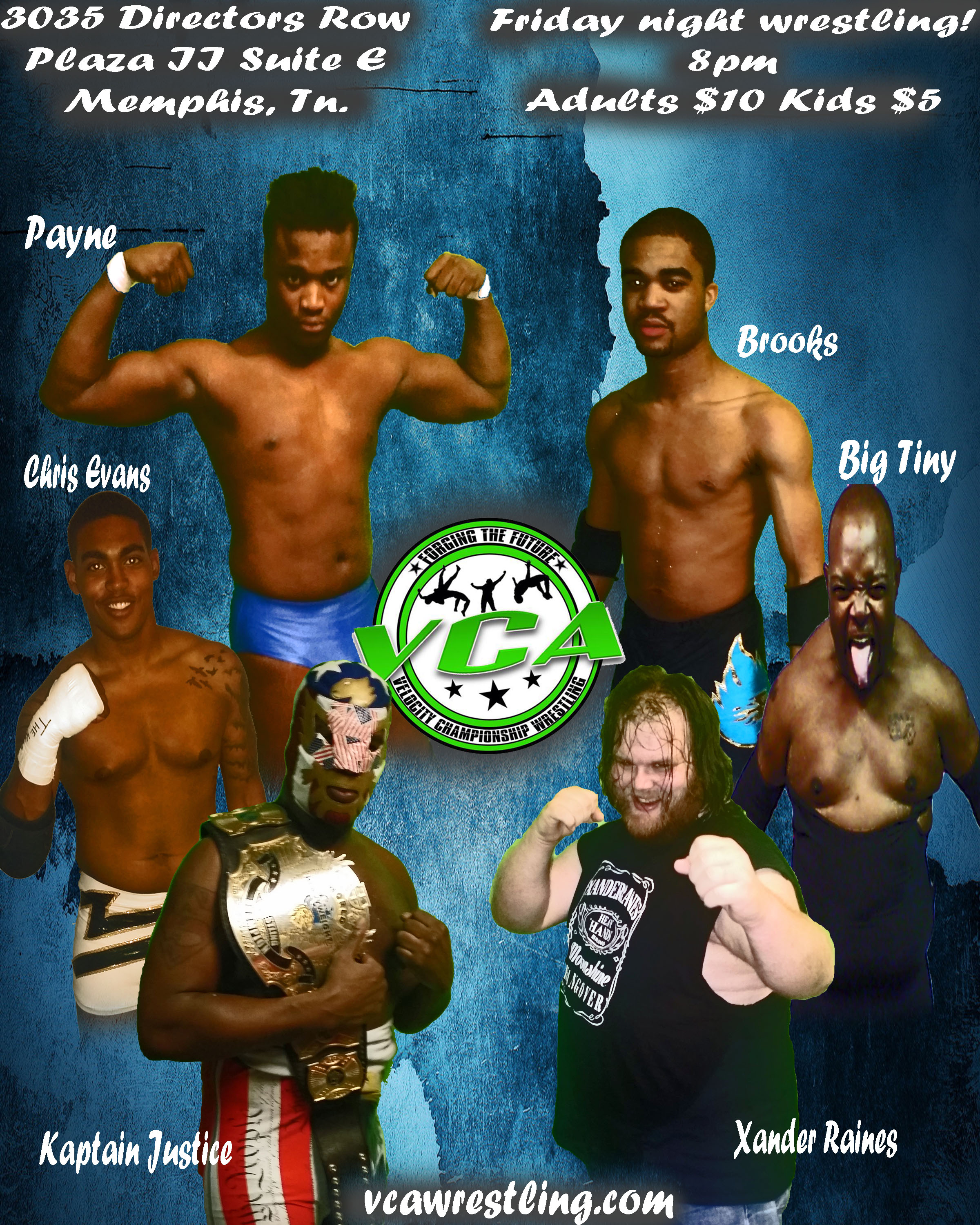 Action is really beginning to pick up at 3035 Directors Row inside the Directors Plaza II Suite E Memphis, Tn. on Friday nights!  The Charlie Parks Tribute Show is quickly approaching and the stars of VCA have been at it big time. The Tribute show will take place next Sunday, August 2nd at 7pm and the VCA stars have really been going at it causing fights and chaos all over the VCA studio.

We’ve just learned Big Tiny will go one on one with “Da Kyd” Chris Evans at the Charlie Parks Tribute Show next week. Terra Rae, CEO and owner of the VCA, claims Evans deserves everything coming to him for declining her offer. We’re still not certain on exactly what it is Rae wants from Chris, but Chris said whatever it is he wants no parts of it.

Also, Brooks will go one on one with Anthony Payne at the Charlie Parks Tribute Show after Brooks made strong remarks claiming Payne was a low life for not taking responsibility for his alleged babymomma and child. Payne accused the situation of going too far and has placed strains on his current family situation. Payne said a man like Brooks is no man to want to rip and part his family like he’s currently doing. Payne told us he couldn’t wait to get his hands on Brooks to stop these alleged rumors. Payne won’t have to wait long because this Friday Payne will team with “Da Kyd” Chris Evans in taking on Big Tiny and Brooks.

Also this Friday, Kaptain Justice will team with longtime friend Allen Dalton in taking on Syn and Floki. Justice insists he has to get his mind back on track after Xander Raines caused him humiliation weeks ago by abandoning him in a tag match against Syn and Floki. Justice added with Dalton teaming with him this Friday he is for surely to get retribution for the loss he suffered against Syn and Floki. Also, Justice feels Dalton can take some of the burden off him by his mind not being in the right place. News broke today that Xander Raines is the new number one contender for Justice’s heavyweight championship, but the two will meet in a six man tag match at the Charlie Parks Tribute Show Sunday, August 2nd.

Syn, Floki, and Dj Stunner are scheduled to lock up with Reno Diamond and Full Deck next week at the Charlie Parks Tribute Show. This is for surely one no one wants to miss as these guys are no strangers to one another. The six have tore the house down countless times and plans on doing it once more next Sunday. Syn informed us he’d speak more on the matter this Friday at VCA’s weekly Friday night show.

Speaking of Xander, Raines will go one on one with Crazy Jack this Friday. Raines informed us this will be a look into the future of what he’s going to do to Justice when they finally meet for the VCA heavyweight championship. Crazy Jack sent word that if Xander Raines thinks it’s going to be a walk in the park with him he’s wrong. Jack heard what Raines said about him being at the bottom of the company and Jack isn’t pleased! No word on when the Raines and Justice will meet one on one for the championship.

Everything mentioned above and more will take place this Friday night. Also, expect to see Malik, Jake, Jason Hall, and others this week. Come out and enjoy great action with the best wrestling company in the area as we get closer to the Summer spectacula the Charlie Parks Tribute Show. Bell time is 8pm and we’re located at 3035 Directors Row inside the Directors Plaza II Suite E Memphis, TN. Tickets for adults $10 & for kids $5.