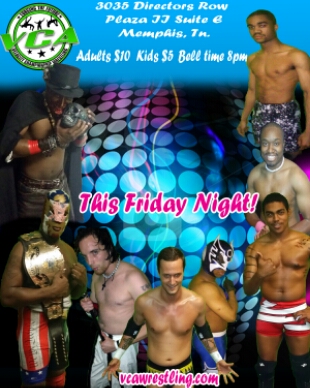 Tomorrow night is the night ladies and gentlemen. VCA will be presented to you live with a belltime of 8pm. As we set sail from LAW & ORDER on the seas to our destination of VERDICT, one can only ask what this crazy adventure is going to bring. First we saw, Allen Dalton successfully defend his Juniorvative Championship. Dalton was a bloody mess in the end but walked away victorious.

Next we would bear witness, to Cymba facing off against Crazy Jack. It would be back and forth with Cymba walking away with the win. Sanchez had been running around for weeks trying to find the Cryptic messenger. It would be revealed as Syn would return to defeat Sanchez with the use of the Canadian Destroyer.

Dalton would be seen delivering a message to all his fans that believe in him, when suddenly he would have his teeth kicked down his throat. Syn would be shown telling Dalton to mind his own business. How will Dalton address Syn tomorrow night?! We would also see Brooks & Payne in a very competitive bout against the Mortons for the VCA Tag Team Championships. Though the Morton’s would take them to the limits, The Morton’s would fall short as Brooks & Payne would retain their championships.

What is next for Brooks & Payne? Finally, the main event would be surrounded in controversy and trickery. It would be Heavyweight Champion, Kaptain Justice facing the monster Big Tiny. Jake would even involve himself a few times at the hand of Terra Rae. In the end, everyone would be confused by a controversial pinfall which official, Fred Jackson would award the championship to Kaptain Justice. How will Rae and Tiny react? Just what will happen on the Path to VERDICT?

You can be sure to find out tomorrow night and every Friday night as Velocity Championship Action is live in Memphis, Tennessee. Tickets prices for adults are $10 and Kids are $5. Children 5 and under get in ABSOLUTELY FREE! Be sure to come out and witness the action live as VCA is the hottest wrestling company in all the Mid-South and surrounding areas. We look forward to seeing all our loving fans as we head into VERDICT!