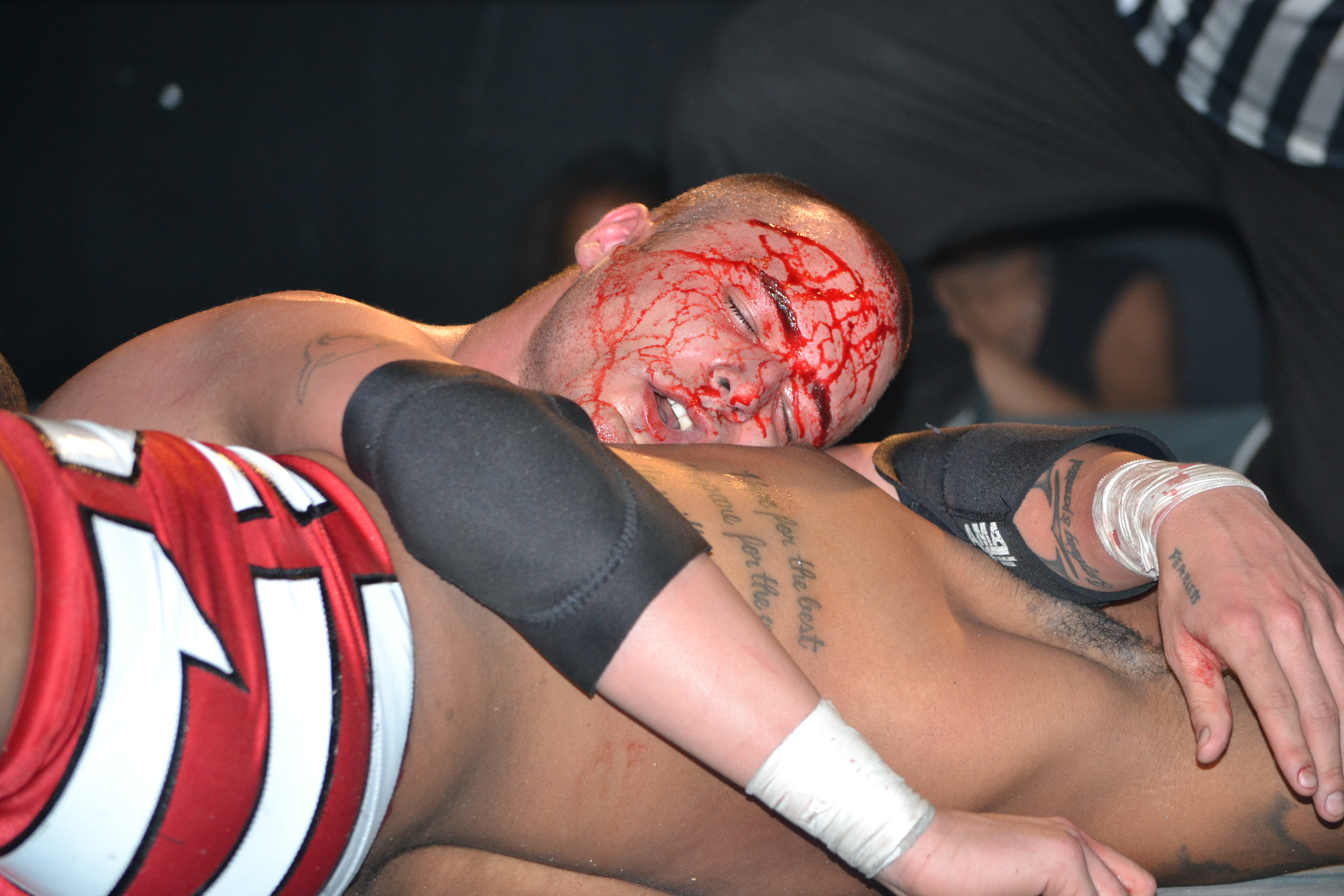 VCA’s Law & Order was last night and the event didn’t disappoint! Every match showcased something different and had fans chanting and yelling to the top of their lungs.

The night would start off with the Fatal Four Way Hardcore match for the Juniorvative championship that featured Malik, Chris Evans, Jake, and the Juniorvative champion, Allen Dalton. All men gave it their all dishing out the maximum damage punishing one another every step of the way. The match would take a turn for the worse when the Master of Hardcore and Terra Rae’s new bodyguard, Jake, would split Dalton’s head open on the outside. As blood gushed from the head of Dalton, fans cringed to their seats barely able to watch the graphic action. As if blood spilling wasn’t enough, Evans and Dalton were inadvertently knocked from the ring apron onto a door that was set up on the outside. Dalton could be seen grabbing his ribs sending more fear through the hearts of the fans leaving them with little expectations and hope. Surprisingly, despite being busted open and acquiring injuries to his ribs, Dalton was able to over come obstacles and win the match by hitting his A.D. on Evans for the win.

The second match was a long and overdue contest between the Hardcore Icon Cymba and Crazy Jack. Jack stated in numerous interviews Cymba’s career was over and he would be the one responsible for putting the final nail in the coffin for the over 16 year veteran. Jack through all he had at Cymba, but in the end Jack couldn’t compete with Cymba’s patent Twist of Fate finisher followed by a huge splash.

The third match was one of the most anticipated matches of the evening. Everyone wanted to know who was responsible for sending Andres Sanchez multiple messages through videos revealing Sanchez’s deepest and darkest secrets. The estranged person turned out to be Syn. Sanchez couldn’t believe it as he had a long and great friendship with Syn throughout the years. Both participants battled back and forwards, but in the end Syn would be the victor. Syn claimed he was sorry for all the videos and messages he sent and begged for Sanchez’s forgiveness. Sanchez loudly said he believes everyone deserves forgiveness so he shook Syn’s hand and gave Syn a hug. Fans yelled for Sanchez not to trust Syn, but Sanchez went with his heart. As soon as Sanchez turned towards the fans, Syn kicked him in the groin and finished him off with a vicious Canadian Destroyer for the win.

The fourth match of the night was for the VCA Tag Team titles between Brooks and Payne and the Mortons. Both young teams had come to Law & Order to show everyone just who the better team was. The match exemplified some the best wrestling the Indy circuit had to offer. During the match the Mortons would score with a double Superkick, dual Suicide dives through the middle ropes, Suplexes, and more. Not to be outdone, Brooks and Payne retaliated by utilizing a German Suplex, a Famouser, a Sharpshooter, and more. In the end, Brooks and Payne would win the match and retain their championship titles after using the referee to their advantage as a prop.

The final and main event of the evening would consist of Kaptain Justice defending his heavyweight championship against Big Tiny. Fans and wrestlers alike wanted Justice to finally put Tiny down, but it wouldn’t be an easy one. Terra Rae, who was positioned on the outside of the ring with Jake, had Jake to climb the apron to distract Justice from finishing Tiny off. The distraction worked as Terra entered from the opposite side delivering a low blow to the champion. Seeing as how Justice was hurt by the sneak attack, Tiny delivered his Final Cut to Justice, but Justice wouldn’t stay down. Justice would fight his way back delivering not one, but two Falls from Justice. Tiny used his last little energy kicking out the two maneuvers shocking everyone. While the referee was down due to Tiny nailing him with a back elbow, Jake would enter the ring and connect with a finisher on Justice, but didn’t realize Justice’s arm was covering Tiny. The referee counted the three and Justice retained his championship title. Rae, Jake, and Tiny were shocked at the referee’s decision claiming Tiny’s shoulder wasn’t down. This won’t be the last time the VCA fans hear this one!