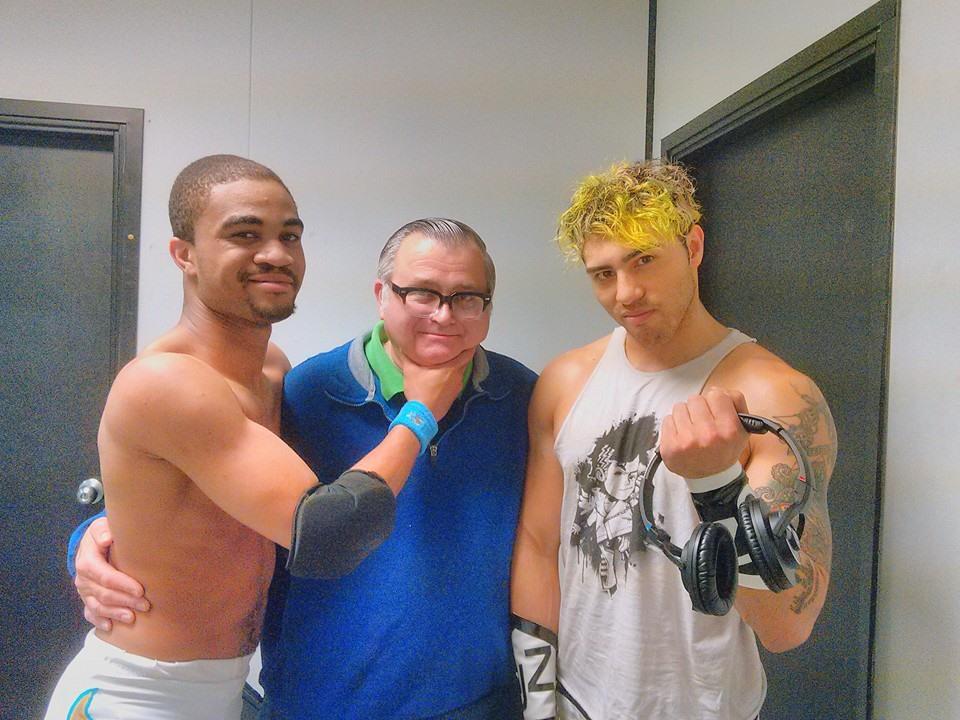 It would be a packed house as Jason Hall returned in a way he only knows how by stated, “I know ya’ll didn’t think ya’ll were having MEGAFEST without Jason Hall!” There was something special in the air as the crowd was excited and prepared for the huge event. We are here to provide you with the results to this action packed event.

This was a match of revenge from the very start. Sanchez would waste very little time trying to get over on the Crazy One. However, it wouldn’t take long for Crazy Jack to take over and start dominating. Using the assistance of the Dark Spirits he continued to put Sanchez down until finally Sanchez would attempt his infamous Wheelbarrow Stunner. Just when we thought he would nail Jack with it, Jack launched Sanchez in the air and caught him with his Sit-Out Full Nelson Bomb. It was all but over at that point but Sanchez would find the heart to stay in it. Jack would then attempt his Crazy Carousel Slam. Sanchez would manage to float over onto his feet and nail Jack with his finisher, The Puerto Rican Sensation. It would be Sanchez who would walk away with the win and redeem his honor. Crazy Jack would be left in the ring going….well Crazy.

Match 2: EVANS AND DALTON VS. BROOKS AND PAYNE

Everyone wants to be the first at something. For all the men in this bout, it was about becoming the first team to ever acquire the VCA Tag Team Championships. It would be an excellent wrestling match to say the least. We would see Dalton and Evans nail a double diving Clothesline from the same corner causing Brooks and Payne to regroup. After Dalton took advantage of Payne, Brooks would nail Dalton in the back as he hit the rope and would yank his throat across the ropes, allowing Payne to take control with a deadly T-Bone suplex that would leave Dalton senseless. The assault would continue as the Official would miss a tag by Dalton to Evans due to a distraction from Payne. Brooks and Payne would go on to show true tag team work against Dalton culminating in a double body splash combo in the corner on Dalton followed with Payne nailing Dalton with a Release German Suplex to once again send the star into a state of daze and confusion. After taking advantage of an opening left by Brooks, Dalton and Brooks would think alike and nail each other with a Double Clotheslines. Both men would end up reeling to make tags to their respective partners. Evans would come in on fire and put work on Brooks and Payne, clobbering them with punches. As Evans would attempt a suplex on Payne, Brooks would come flying over them both with a Sunset Flip Pin on Evans. Dalton would Clothesline Brooks breaking the pinfall. As Dalton and Evans went to execute a Double Clothesline on Payne, Brooks would snatch Dalton out of the ring and break a pinfall on Payne after Evans nailed Payne with his finisher, The O.Y.B. As Brooks hit the ropes, Dalton would return the favor by pulling Brooks from the ring. Dalton prepared to fly over Evans and onto Payne to end the match and seal the deal, but Brooks would catch Dalton form behind causing him to straddle the ropes, and as Evans would turn to check on his partner, Payne would roll him up for the win.

Winners and First Ever VCA Tag Team Champions via Pinfall: BROOKS AND PAYNE

Big Tiny would arrive in the studio infuriated about not being on the card for MEGAFEST. He would go on to state he didn’t care who, but that someone better come on get their tail handed to them. Cymba would arrive in the studio to accept the challenge and the two would begin fighting. There would be no love loss as the two met blow for blow. Cymba at one point took Tiny’s head off with a Clothesline. Then out of the blue, Tiny nailed the referee in the side, causing some controversy on whether or not he had done it on purpose. In the end, Tiny would get counted out intentionally but Cymba would get on the microphone and state that it was “far from over.”

This match has happened before; In fact, two times, leaving both men with a victory over the other. This would be the match to finally settle the score. The hometown hero, Malik, would arrive in the studio first and he looked determined. Ion would arrive second, poking fun at Malik and degrading the crowd. The two would test each other’s skill and ability at the beginning of the match. And boy were they moving, countering each other back to back no giving each other the room to breathe. During one point of the match, Ion would call to the back for someone to kick start some music for him. The song that echoed over the PA system throughout the whole studio would not please Ion in the least bit. Ion would scream to the back demanding that another song be played but to no avail. Malik, then, would sneak up on Ion, pulling his tights down to his knees. Ion hopped around embarrassed trying to pull up his tights. Ion would go on to kick out of Malik’s Lights Out Kick, a feat not many have accomplished. Ion would end up getting Malik in a vulnerable position as he asked for a microphone and told the crowd he would finish Malik with any move that they wanted. “Let’s go, Malik!” chants radiated and bounced off the wall threatening the entire structure of the building as Ion claimed that was not the name of a wrestling move. Ion would finally state that he would finish Malik with Malik’s very own Brainbuster. As he finally handed the microphone off to the Official, Malik nailed Ion with the Brainbuster and ended up walking away with the victory.

Everyone was on edge about the bout for the VCA Heavyweight Championship. Even, we at the office were in anticipation over what might happen. Xander Raines would arrive in the VCA Studio, of course with Big Tiny. The studio would erupt as Justice entered the Studio and showed the loyal fans some love. After showing the crowd appreciation, Justice jumped in the ring. After official introductions, the two wasted no time and met in the middle of the ring exchanging blows. It was a slugfest with both men trying to prove why they deserved to be the VCA Heavyweight Champion. Raines began to take control of the contest, living up to his promise of beating Justice black and blue. No one could doubt that Justice was in the fight of his life. Raines would even power Justice up deliver his Blue Thunder Bomb, leaving Justice devastated. Justice would finally muster up the strength to attempt to Bodyslam Raines, however, Justice was too drained and Raines slipped away. After regaining his composure, Justice muscled Raines up finally Bodyslammed the Country Giant. It was as if two semi-trucks collided. Justice would immediately get the crowd behind him as he delivered a thunderous Chokeslam, As Justice made the pinfall, Tiny, would pull the Official out before he could count the three. As the crowd showed their displeasure, the Official ejected Tiny from the Studio. When Tiny refused to leave, Cymba would arrive form the locker room taking it to Raines. As Raines went to finish Justice with his Moonshine Hangover, Justice would counter out and once again nail his patent finisher. 1…..2…..3! And still your VCA Heavyweight Champion and fan favorite, who finally cemented his spot upon the Heavyweight Champion throne, Kaptain Justice!

Just when we thought everything was said and done, Tiny and Raines would begin arguing. Terra Rae, The Director of Authority, would enter with a chair in hand. One would suspect she would hand it to her brother, Xander Raines, but in an interesting turn of events she would give it to Tiny and he would begin slaughtering Raines with a chair. There are no updates on this situation at this point but as soon as we hear something, so will all our fans!

VCA would like to thank all the fans and everyone who participated to make MEGAFEST such a success. Congratulations to the lucky child who won the bike in the VCA Bike Raffle and congratulations to all the crew and wrestlers on a very entertaining and successful show!

VCA is live every Friday night at 8pm. Tickets for adults are $10 and Kids are $5. Children 5 and under are completely free. VCA Studios is located at 3035 Director’s Row Plaza II Suite E in Memphis, TN.