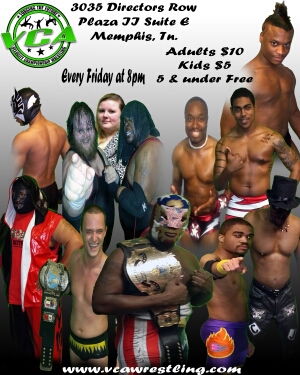 Now that VCA’s Verdict has passed, we’re wondering what’s next for the stars of VCA!?!

Xander Raines’ returned last week and received one of the greatest receptions of the night. Not only did Raines receive a standing ovation, but Raines saved the job of Fred Jackson by defeating Big Tiny via count out. As our crew caught up with Raines later that evening, Xander revealed he didn’t know exactly what was next for him in the company, but Raines did tell sources that he’d be soon looking to get back in the title picture.

Brooks and Payne’s fate can be questioned as well. After losing their tag titles at Verdict last week, many are wondering what will be next for the team? Will the team split and go their separate way? An inside source said Brooks briefly admitted he missed competing in singles action, but more specifically the Juniorvative championship. Another source said Brooks and Payne immediately stormed Terra Rae’s office after their match demanding a rematch. Keep in mind these sources have yet to be confirmed.

Allen Dalton did what many felt he couldn’t and that’s retained his Juniorvative championship against Syn. Dalton has defended his championship well as of late, but how much longer can Allen keep it up? Dalton has defended the Junior title longer than any other champion in the company, but one can only think Dalton’s getting emotionally and physically drained from fighting off challengers.

How will Kaptain Justice defend two championship titles!?! Yes it looks darn good having two championship titles, but what will be the physical effects of having them both? Can Justice’s body stand competing against Big Tiny in a heavyweight title match and then against Brooks and Payne in a tag title match the same night? If needed, will Justice compete twice in one night or will he force Chris Evans to fend for himself? Which title is more important to Justice? These questions and more are only a few obstacles Justice will be faced with in time as double champion.

Tiny said he wanted Jackson to feel what he’s been feeling for weeks, but after Raines saved Jackson from death at Verdict last week, does Tiny still seek retribution from Jackson? We can confirm that Terra did tell Tiny once he’s done with Jackson he can have another shot at Justice. If Justice defends his two titles in the same night he will be easy pickings for Tiny. We could be seeing a new heavyweight champion soon!

There’s no telling what might happen as the Charlie Parks’ Tribute Show approaches. Join us this and every Friday night at 8pm. Adults $10 & Kids $5. 3035 Directors Row inside the Directors Plaza II Suite E Memphis, TN.