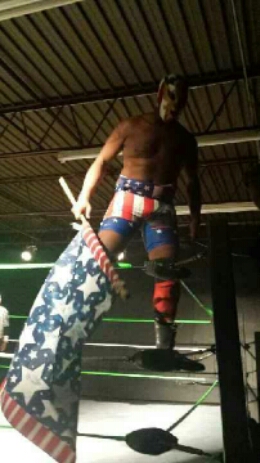 We are on fire here at Velocity Championship Action as we lead into our biggest bash of the Spring time known only as MEGAFEST.  There has been speculation about every single match on the card and fans love it. It’s easy to see why VCA is the hottest commodity in the Mid-South. One of the grand matches to look forward to is the VCA Heavyweight Championship match which is set between the current Champion, Kaptain Justice, and a man who has lost his mind over a championship and has become very abusive towards anyone ‘he thinks’ is in his way.

This all started at Law and Order where we would witness, Kaptain Justice overcome fourteen other superstars to become the first ever VCA Champion. This didn’t sit well with Raines as he claimed that Justice was undeserving of the Heavyweight Championship.  He went on to state that all Justice ever was, was full of excuses and let downs. Raines has become excessively violent to get this point across. One would begin to wonder if Raines is even deserving of the Championship after his actions of late.

Justice responded by stating as long as he stands for the people of justice, the Red, White, and Blue, and all the VCA fans, he can’t lose. Raines responded by saying that the only colors he will be representing is Black and Blue cause he is going to beat Justice senseless. Justice refuses to give up on himself and the people; this is something Raines can’t understand because he believes the people don’t matter.

All in all, it will be a fight for the ages. But who will be Heavyweight Champion when the smoke clears? We will certainly find out when the lights are there brightest at MEGAFEST. But only one superstar in this match will be staring up at the lights as the other will be standing above him as the VCA Heavyweight Champion. All of this is live at MEGAFEST on Sunday April 5th, 2015 in Memphis, TN at 6 pm and all tickets are only $12! You won’t want to miss a second of this action!